Last month, an El Paso woman was shot in the leg by a stray bullet coming from a gunfight in Juarez, Mexico – one of the most dangerous cities in the world.

According to the victim, Maria Romero, she was in the wrong place at the wrong time when she got shot.

What was she doing?  She was doing some morning shopping in downtown EL Paso, TX, on Tuesday Feb. 21.

“We were going to see some pieces for a cake, some roses to mount the cake,” Romero told local reporters.

It was around 11 a.m. when a bullet struck the 48-year-old’s left calf, penetrating straight through.  She was pushing a baby stroller at the time of the incident; her daughter was inside it. 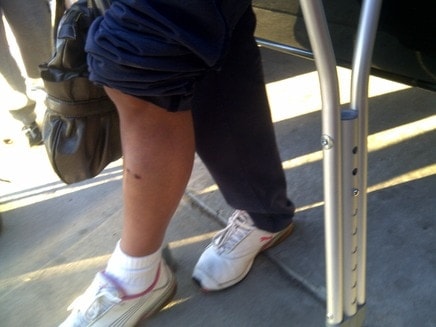 The wound was caused by a “full metal jacket hard-nosed bullet probably fired from an assault rifle” said Greg Allen, El Paso’s chief of police.  That, he added, along with the distance it was fired from is the reason the projectile caused a clean exit would.

“When we heard the bang, we all yelled and when people saw that my leg was bleeding, everyone was surprised to see that this was happening here in the U.S.,” Romero said. “From the sound of it we thought that someone was shot close by, we never imagined it came from Juarez.”

“The police said that if it was close by it would have torn my leg apart, a bullet that size,” said Romero.  Thankfully, Romero was okay following the shooting.  She was treated and released from the hospital later that day.

Authorities believed that bullet came from a gunfight involving Juarez police and suspected carjackers not too far away from the U.S. border.  Chief Allen said that reports suggested that up to 50 shots were fired during the melee.

In an attempt to trace the bullet to back to a gun/gun owner, the bullet was sent to the
Texas Department of Public safety for ballistic testing.  Thus far, it’s unclear who fired the bullet. 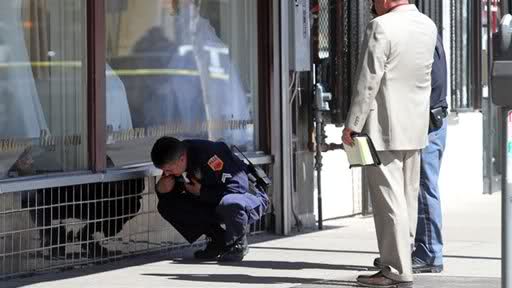 Since the drug-related violence has escalated in Mexico since 2006, stray bullets have continued to fly into El Paso.  So far, the local high school, City Hall and the University of El Paso have all been hit.  And now, for the first time (and hopefully the last) a person.

City officials seem to be almost fatalistic about the drug war going on across the border and the danger it presents to El Paso residents.

El Paso Mayor John Cook told residents to remain calm after the shooting, saying there is “no way to prevent incidents like this from happening” and the odds of getting hit by a stray bullet are minimal.

Is Mayor Cook correct?  Is there no way to prevent stray bullets from zinging over into public areas?  Is it just a matter of being in the wrong place at the wrong time as Romero suggested?

Romero is resigned to that conclusion.  “There’s no one to blame. That bullet came, hit me, there’s nothing else,” she stated.

It should be noted that Mexican officials have denied that the bullet came from their side of the border.  Moreover, Chief Allen admitted that the ballistic testing is unlikely to yield an owner of the gun.