FPSRussia, YouTube comedian and Internet shooting celebrity and US Tactical Supply have come together to develop tactical bullpup kits for M14 and M1A battle rifles.  They’re flashy and FPSRussia-branded, and they have rails from here to there.  FPSRussia has successfully promoted his line of outerwear but this is the first actual FPSRussia firearm accessory we’ve heard of.

The FPSRussia Juggernaut chassis reduces the overall length of a full-size M14 or M1A by nearly a foot, 11.75 inches.  This brings it down to 35 inches in length, which means it can now be used in close-quarters combat (CQB) situations.  Plus it makes it look all tacticool and mean. 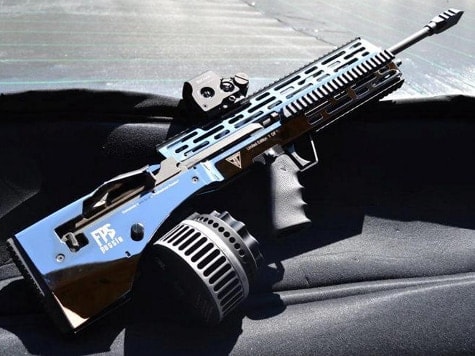 The Juggernaut chassis is two-tone black, matte black on black chrome or “Tactical Tan” on black chrome, with an FPSRussia logo etched into the buttstock of the chassis.  It does have quad rails, laid end-to-end 39 inches of rail.  The top rail runs from the back of the chamber to the end of the gas system.  The whole thing is made from 6061 T6 aluminum, and hard-anodized Type III mil-spec where it isn’t chromed.

The chassis uses AR pistol grips and includes special neoprene barrel bedding inserts which conform to the various small differences in tolerances of the many rifles, as they have been made by many different manufacturers.  US Tactical Supply claims it should work for ever rifle from the SOCOM-16 to an original USGI M14 rifle, single shot or fully-automatic.

FPSRussia’s first gun accessory will surely prove to be controversial.  Although not many will be surprised that it’s a tacticool black-on-black anything.  The M14 and its modern counterpart, the M1A are beloved American rifles, and while some versions of the M1A are operator-friendly with polymer stocks and rails, the guns are generally considered to be the last of the great battle rifles, with big bullets and long barrels and pretty wood stocks.

By the same token, many will surely be taken by this sweeping revisioning of this Vietnam War-era rifle.  Especially if US Tactical Supply is not overstating the truthfulness about the trigger being crisp and positive.

Given the mechanical constraints of reworking a firing control group remotely to place the action of the firearm behind the grip, many bullpup rifles have unappealing triggers.  For $1,400, it would be upsetting to hear that the Juggernaut was no exception.

And no, $1,400 does not include the rifle.  Yes, the first FPSRussia gun accessory is a high-dollar gun accessory, if you’re familiar with his work than you’re probably aware that the cost isn’t much of an issue.  That being said, this is also an extremely limited edition stock, with just 10 FPSRussia Juggernauts being made, and will no doubt have some fans champing at the bit.

Money aside, would you like to try an M14 or M1A bullpup?