Mexico Has Millions of Illegal Guns, But One Legal Gun Store

For Mexico’s 112 million citizens, obtaining a gun is rather easy.  That is, unless one wants to purchase it legally. See, although Mexico is the 11th most populous country in the world, it has only one gun store where citizens can lawfully purchase a firearm.

A recent article, published by McClatchy Newspapers, investigated this dilemma, which is created by a combination of strict gun control laws and a spike in drug-related violence.

The author of the article, Tim Johnson, pointed out the unfortunate reality, criminals and drug cartels have no difficulty obtaining firearms, meanwhile law-abiding citizens must satisfy a list of requirements and travel to the country’s lone gun store, tucked away on a military base run by the army, if they want to legally purchase a firearm.

Johnson pointed out that not only is there just one government-run-store, but that its existence is largely unknown.

“The federal firearms law forbids us from advertising so as not to promote rampant gun buying,” army Col. Raul Manzano Velez told Johnson.

But even for those who are fortunate enough to make the journey to the ‘Directorate of Arms and Munitions Sales,’ what one can purchase there depends upon the type of gun permit he/she has. 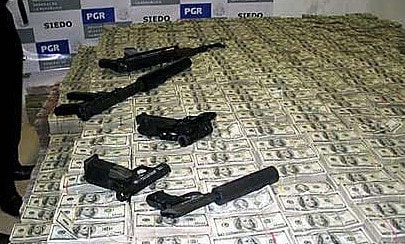 To obtain a gun permit in Mexico one must produce an official photo ID, proof of residency and employment, a document showing the completion of military service and a declaration of a clean criminal record.

Once one has satisfied those requirements, one has to decide if he/she is seeking a gun for home protection, hunting and/or shooting sports, or to work at a private security firm.

If one is simply seeking a gun for self-defense within the home, the law mandates that the permit holder may never leave the house with it.  Moreover, there are restrictions on caliber size: it can range from .22 to .380-caliber, nothing larger.  It can be a pistol or a revolver, but cannot be a long gun (rifle or shotgun).  Lastly, the permit holder may only purchase one single gun.

For marksmen and hunters, the law permits them to own up to nine single-shot rifles or shotguns and one small-caliber handgun.  According to Johnson, Mexico has 89 gun and hunting clubs and 20 government offices that sell hunting licenses.

For those who are seeking employment with one of Mexico’s 289 private security firm, there is yet another permit.  This one loosens restrictions to allow one to obtain semiautomatic weapons or higher-caliber handguns.

Col. Manzano admitted to Johnson that the system is “very inconvenient” for the buyer, especially given the underground market for weapons.

“There is an enormous black market in the country. You can buy any weapon without any problem on the street. That is the reality in Mexico,” he told Johnson.

Obviously, things in the U.S. are different.  According to Marc Willis, a spokesman for the U.S. Bureau of Alcohol, Tobacco, Firearms and Explosives, in the four U.S. border states — California, Arizona, New Mexico and Texas – there are 20,834 firearms dealers licensed by the U.S. government

Yet despite having so many gun stores and so many guns available to the public, the U.S.’s homicide rate is 1/3 of what Mexico’s is (18 homicides per 100,000 people).  And in Mexico states where drug cartels have a heavy presence, such as Chihuahua, the drug-related homicide rate is through the roof: approximately 67 per 100,000 inhabitants.

It’s no secret that Mexico’s President, Felipe Calderon, blames America for its spike in drug-related homicides and the large number of guns available on the black market.

He has said, on numerous occasions, that the cartels in Mexico have grown stronger due to “unlimited access to high-powered weapons that are sold freely and indiscriminately in the United States of America.”

In short, evidence suggests that gun trafficking from the U.S. into Mexico is overblown, at least with respect to U.S. firearm dealers selling guns indiscriminately (there’s no doubt that the U.S. Government has sanctioned the controlled delivery of illegal guns into Mexico via programs like Fast and Furious).

Yet, despite these facts and statistics, President Calderon continues to blame America for his country’s woes.  Meanwhile, as the drug cartels continue to have their way with the country, many law-abiding Mexicans are left defenseless.