From the Remington Model 95 to the Heizer DoubleTap: the Case for the Derringer

Recently, I asked some gun owners I know their feelings about carrying a derringer in this day and age of polymer frame whiz bangs, deep concealed carry pocket pistols and snub nosed revolvers.

Most perked up at the mention of the name and said that derringers intrigued them but few responded that they would actively carry one, usually stating something like they thought there were better self defense options out there, so what’s the point? Well, considering that Henry Deringer’s original palm pistol concept has sold continuously since 1852 and been copied more times than calculus homework, I had to wonder why?

Henry Deringer came from a line of colonial gunsmiths.  His father Henry Deringer Sr. produced weapons for the colonies during the Revolutionary War.  Deringer Jr. apprenticed under his father and moved to Philadelphia around 1810, setting up shop on Tamarind Street. 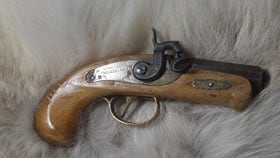 Deringer landed a couple government contracts for rifles but became best known for his high quality dueling pistols and around 1825, Deringer produced the first working prototype of the flintlock muzzle loader palm pistol.  Like dueling pistols, these were also sold in pairs (for around $15-$25 dollars for a set) though today, finding matched pairs of original Philadelphia derringers is increasingly rare.  Most were not used in the ritualized “dueling” capacity and were often split up for concealed carry.  Additionally, the second blackpowder pistol was largely seen as a way to compensate for the gun’s limited power—more of a marketing nicety used to sell people on the tiny guns than a practical feature.  Custom engraved models commanded higher prices and the practice of selling them in pairs would drop as derringers moved into the cartridge age.

According to Deringer’s own records, about 15,000 Deringer pistols were manufactured. All were single barrel pistols with back action percussion locks, typically .41″ rifled bores, and walnut stocks. Barrel length varied from 1.5″ to 6″, and the hardware was commonly a copper-nickel alloy known as “German silver”.

The back action lock later utilized an improved lock design, which had its spring and mechanisms located behind the hammer.  Here, the moving parts were protected from dirt, fired cap residue and gunpowder residue, unlike earlier front action lock models that had their springs and mechanism located directly in the path of such residue in front of the hammer, under the tube. Knock-off derringers were notoriously unreliable and this went a long way to remedying this.

Initially popular with military officers stationed out in “Indian Territory” (a pocket pistol was though to be the best defense against Native American “ambush” tactics which often occurred at night), the Deringer became widely popular among civilians who valued a small and easily concealable pistol for self defense to combat mounting lawlessness as the nation grew.

The word ‘derringer’ is actually a misspelling of the last name of Henry Deringer and over the years the derringer name has been used to refer to many specific breeds of pistols, but the term ‘derringer’, as we understand it today, commonly refers to the smallest usable handgun of a given caliber (though even this definition can seem to adjust with marketing practices).  Some people add the distinction that the gun is also neither a semi-automatic pistol nor a revolver.

Deringer famously never secured a patent for his guns, even though he sold them as quickly as he could make them.  Like Kellogg’s Corn Flakes, competitors unabashedly pirated the derringer design, often copying his Philadelphia models right down to the manufacturer’s proofmarks and some going so far as to employ a token “John Deringer” in order to justify the inclusion of the name (try doing this today, even without a patent, and you can expect to see the inside of courtroom). Indeed, Deringer would spend much of his professional life fighting design infringement and the Deringer vs Plate ruling in 1865 (which Deringer won, though only three years before his death) became a landmark case in trademark law.

No one knows for sure when the misspelling of the name took place (or whether it was intentional or unintentional), but it lead directly to two developments that would greatly impact on the life of the gun:

One, derringers were tendered in a wide variety of calibers and configurations from small caliber single shot pistols on up to the .50 caliber Sharps four barreled derringers as gun makers had to go out of their way to distinguish themselves from the herd.  The market became so flooded with counterfeits from 1860s to the 1930s, that no one will ever know how many derringers were ever produced or how useful/useless some of these attempts were.

And, two, the label ‘derringer’ became genericized, becoming so colloquially understood for as the smallest gun available, the name not only became synonymous with small pistols, it began to symbolize discreteness and surreptitious self defense applications. 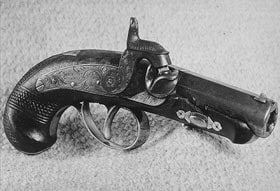 In one manner of thinking, the advent of derringer marks a shift in America’s philosophy towards firearms and one that, in the age of concealed carry, continues to blossom.  Rather than military arms or tools for hunters, the American public accepted the derringer as a “civilian gun” meant to keep the owner safe, without announcing or telegraphing the fact that they were armed.  This movement in thinking complements the transformation of an untamed west to a “civilized’ America, more suited to unassuming pocket pistols than Colt SAA’s riding on ones hip.

Accordingly, derringers were first carried by women, earning them the nickname “purse gun” or “stocking gun”.  They were also a favorite among gamblers and saloon goers, who were often asked to surrender their sidearms before entering the building.

But perhaps the derringers’ most dubious distinction is its reputation as an assassins’ gun.  John Wilkes Booth used a derringer to assassinate Abraham Lincoln. The gun is on display at the National Museum of Health and Medicine in Washington and is considered to be a highly unusual example: the rifling has a left-handed twist, rather than the typical clockwise twist used on most Philadelphia Deringers.

Considering all the different gun makers who had their fingers in the derringer market, it should come as no surprise that the gun has remained pretty much in step with all the major firearm innovations of its time with the genre transitioning almost seamlessly from the flintlock age to percussion and so on. It also helped that some of the big name makers—like Colt with their Model 1, Wesson and Sharps —were not above poaching the derringer design as well, usually bringing their innovative manufacturing processes to the party while colluding around patent law.

When the self contained cartridge arrived, the derringer evolved with it, yet it’s important to realize that older models would also remain popular for decades, despite technological advancements. We see this today with the fact that perhaps the most popular derringer ever made was the Remington Model 95 over and under derringer.

The Model 95 was first introduced in 1866 and lasted for nearly seventy years in production, ending its run in 1935. The most popular caliber was the old .41 rimfire, which was hardly a barnburner at 425 fps with a 130-grain bullet, but in the days before decent medical care staring down the twin barrels of that little pocket gun from across a card table had to be an attention getter.

These had hollow rather than skeleton butts and did not feature an extractor to remove the round. Future models would utilize a skeleton butt, two-part and one-part extractors.

So do derringers have a real use? Sure they do, even if most people don’t want to admit it and you should know that understanding the function of 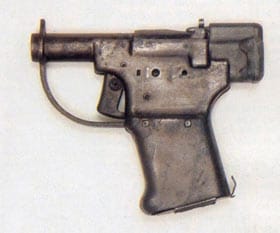 Remington’s Model 95 derringer means that you pretty much understand all derringers because, despite all the modern technology of the twentieth century, this concept has been left pretty much unchanged, through the 1940s Liberator .45 ACP pistol that were intended to be dropped to insurgents and used on occupation forces in Europe and Japan and even into today’s ultra thin Heizer Doubletap—the newest derringer inspired pocket pistol.

Why would you carry one?  One word: summer.

While ideally one would like to have a gun on them at all times and it’s not always the easiest thing to do as the temperature rises and we lose layers of clothing. Ask yourself, how does one go about trying to concealed carry around a Glock on a really hot summer day? Few things can be more uncomfortable than trying to wear a sidearm in an inside the waistband holster when it’s hot and sticky out.

This is where the derringer shines.  The gun slips into a pocket and takes up the same space as a set of car keys or a big cell phone. Today you can find several good copies out there of the Remington Model 95 derringer, and in everything from .22 long rifle up to some impractical cartridges like the .44 Magnum.  Currently, Guns.com is eagerly awaiting the aforementioned Heizer DoubleTap—a pistol with two barrels of .45 ACP, two rounds waiting to reload and one that literally disappears in a jeans pocket.  A two barreled gun in .38 Special, .44 Special or .45 ACP is certainly nothing to sneeze at either.

Make sure that if you do buy a derringer you realize what it is. It is not a gun where you will be engaging targets from twenty five yards away; they call them belly guns for a reason: at three or four yards and aimed right at a bad guys belly button they can put a serious hurt on the toughest hombre. A derringer is like any other gun, learn its limitations, choose the right type of ammunition and you will get a better idea of what you have.

Derringers have a place in any gun owner’s arsenal, such as it is. Don’t dismiss them just because they only fire a couple of rounds. I would rather have a gun that fires only a couple of bullets than have left my handgun home because it is too bulky, too hard to conceal or is just too much of a pain in whatever part of the body it is sticking to. A gun, regardless of what it is, is better than being left with nothing.