An unarmed teen carrying a packet of Skittles and an iced tea is tragically shot and killed in a Florida suburb.  An artist showcases her exhibition – ‘Gunplay’ – of photograms depicting various handguns at a Gallery in Houston, TX.  Should one’s knowledge of the former affect his/her appreciation of the latter?

Meredith Deliso, a writer who covers visual arts for the Houston Press, had this to say in an article about Harlow Tighe’s provocative exhibition ‘Gunplay,’ appearing now through April 21 at Gallery Two1Four in Houston, TX, “I was almost seduced by Harlow Tighe’s photograms… But then, I read about Trayvon Martin, a Florida teenager who was killed by a handheld gun — a Kel Tel 9 mm, to be exact — while walking home from a convenience store last month. And then, this “gunplay” doesn’t look so cool anymore.”

As the title of the exhibition would imply, ‘Gunplay’ contains a series of gun images that are displayed in a creative and alluring way.  To be more specific, the images were created using the photogram technique in which real guns were placed on a photosensitive surface and then exposed to light.

The question of whether the images are ‘cool’ is irrelevant, as “De gustibus non disputandum,” but what is relevant, what does matter, is the rubric by which one evaluates the art.  That is, and in this particular case, is it fair to disparage one’s work based off of an unrelated event (if one considers the shooting of Trayvon to have bearing on the artwork, then to be fair one would have to say that all gun activity is related to the work)?

Deliso must believe so because she goes on to say that “reading about unnecessary, destructive gun violence after seeing an exhibition that essentially glamorizes guns just doesn’t sit well.”

Two things are going on in this statement (a) Deliso has trivialized Tighe’s work by using a hasty generalization to described its impact, “essentially glamorizes guns” and (b) Deliso has unfairly discriminated against Tighe’s work because of the shooting of a Florida teen.

If Deliso carefully read Tighe’s statement about her work she would have realized that the point of the project was not to “glamorize guns” but to explore the power dynamics represented by guns.  This is a slight distinction, but it’s a very important one. The first assessment implies that she wants the viewer to see guns in a positive light, the second implies a more objective and dispassionate treatment of her subject that allows the viewer to draw his/her own conclusions.

Tighe, a South Carolina native who grew up around guns, explained more about the objectives of ‘Gunplay’ in her statement:

“I wanted to look at this power from different perspectives, and see if that power could be transformed in some way. Would it be diminished, enhanced or changed by associating typically hard, cold metal with botanical elements, delicately feminine garments or a child’s toy gun? Would examining guns as objects of curiosity, playing with their shapes and lines and recombining them turn that power on its head and create something lyrical? Could I create new variations on a theme by working with the guns’ formal elements?  Would an approach akin to a jazz improvisation transform raw power to something akin to beauty?” 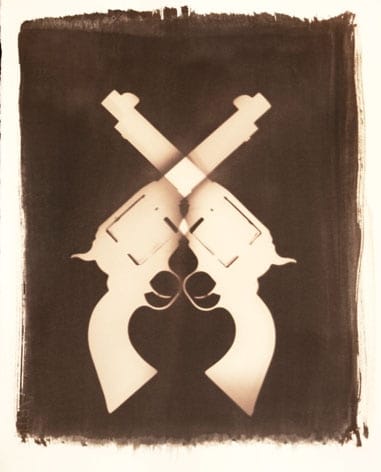 As for the point about discriminating against her work, that’s clearly evident in the aforementioned remark, but becomes fully manifested in Deliso’s conclusion in which she states:

It’s unfortunate timing, but in the wake of a senseless murder and the real, damaging effects of gun violence, these images are too stylized and detached to come off as anything other than irresponsible. Tighe is not trying to be subversive, but create aesthetically pleasing imagery. In doing so, she is giving guns more power, not taking it away.

Is Tighe’s artwork irresponsible?  Is artwork supposed to be socially, culturally or politically responsible?  As an artist does she have any other responsibility than to stay true to her artistic impulses?  Moreover, should the goal of her exhibition ‘Gunplay’ be to take power away from guns?  Who’s to say that it doesn’t already do that?  Think about it, one can argue that a gun shooting flowers subverts the notion that guns are powerful.

Yes, the death of Trayvon Martin is a tragedy.  But moving forward are we to see all images of guns and gun owners refracted through the Trayvon Martin case?  Is that not unfair to all responsible and law-abiding gun owners (not to leave out artists like Tighe who use guns in their work)?

Also and as an afterthought, perhaps, one should tell Ms. Deliso the story of Sarah McKinley, the 18-year-old mother who shot and killed a man who was attempting to break into her home carrying a 12-inch hunting knife.  Maybe then these pictures won’t look so ‘irresponsible.’