The Irish army is updating their 6,000 Steyr AUG bullpup rifles to bring them in line with the rifles used by the UK and the US.  They have set aside 3 million euro for this, working out to 500 euro per gun (currently about $650).  Ireland’s army has been using the same rifles since 1988.

Specifically that rifle is the Steyr AUG A1, the first generation of the AUG rifle.  While in some ways more advanced than many rifles today, some of its features are painfully out of date.

The AUG is a bullpup, so the action cycles behind the trigger and the magazine is inserted into the stock.  Combined with an integrated front pistol grip, the AUG is a very low-recoil rifle and extremely compact.  Overall, the rifle is 31 inches long, and that’s with a rifle-length 20-inch barrel.  AUGs are also fully-ambidextrous and can be converted to eject on either the left or the right side with a change of the bolt carrier.

The controls are ambidextrous although the AUG has no fire selector.  It has a two-stage trigger that will fire a single semi-automatic shot with a pull to the first stage and it will fire fully-automatically if the trigger is pulled all the way back to the second stage.

All of that is why Ireland’s army plans on keeping their AUGs and not what they are looking to update.  Mainly they’re looking to replace the 1.5x fixed optics integrated into the AUGs’ carrying handle with something with greater magnification as well as night-vision capabilities.  It’s also safe to say that the integrated night sights are pretty dim; tritium has a half-life of just over 12 years; right now they’re at about ¼ brightness. 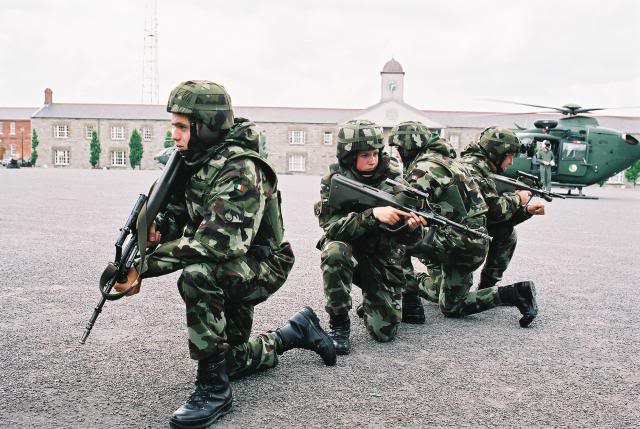 In addition to replacing the optic and iron sights, the Irish army is looking to finally pick up a few rifle-mountable grenade launchers.  The carbine- and rifle-length AUG barrels are capable of being equipped with 40mm grenade launchers.

“The modifications will extend the life of the Steyr out to 2025 and beyond,” reports the Irish news agency the Independent.

“Given that technical and logistical support services are in the main already in place, the rifle enhancement programme offers considerable economic advantage as against the procurement of brand new weapons.”