Mayors Against Illegal Guns, an organization founded by New York City Mayor Michael Bloomberg and Boston Mayor Tom Menino, has launched a website dedicated to defeating two senate bills that would allow law-abiding, concealed carry permit holders to carry handguns in any state that issues CCW permits or does not prohibit concealed carry.

The name of the website is ‘OurLivesOurLaws.org,’ and its objective is to “defend the rights of communities to protect themselves with the laws they know will keep guns out of the hands of criminals, drug abusers, the mentally ill, and other dangerous people.”

Sen. Thune’s S.B. 2213 was introduced in the Senate last week and Sens. Begich and Machin’s S.B. 2188 was introduced the week prior.  These self-defense bills are – in effect – identical in that they would establish universal concealed carry across the U.S., except in Illinois and Washington D.C., the two remaining places that outright ban CCW.

Neither bill would affect existing state laws that restrict where concealed carry firearms may be carried (schools, government buildings, churches, etc.).  Out-of-state visitors would be obligated to abide by the law.

S.B. 2188 is the sister bill of H.R. 822, the National Right-to-Carry Reciprocity Act of 2011, which the House of Representatives passed on November 16, 2011, by a majority bipartisan vote of of 272-154, with only seven Republicans voting against it and 43 Democrats supporting it.

In response to these bills, supports of Mayors Against Illegal Guns argue that, if passed, either bill would essentially gut state authority to set basic eligibility requirements for people who want to carry concealed handguns.

“States and cities across the country have always had the authority to decide whether some people are just too dangerous to carry a loaded, hidden gun in public,” Mayor Bloomberg said in a press release.

“This bill would take away that authority and force states to allow out-of-state permit holders who have records of domestic violence, have certain misdemeanor convictions, or haven’t completed basic gun safety training to carry loaded guns in public,” Bloomberg continued.  “When it comes to public safety, Congress has no business telling states, cities and police how to do their jobs.”

In addition to the ‘states rights’ argument, Mayor Menino chimed in claiming that the bills would create “chaos and confusion” for law enforcement. 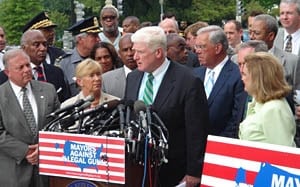 “This legislation would remove that certainty and replace it with chaos and confusion, because officers would have no way to verify that a permit is real,” Mayor Menino said in the press release. “It undermines local laws, it undermines police and it undermines public safety.”

The group currently claims that 65,000 Americans have joined their fight against national reciprocity, including police, prosecutors, domestic violence experts and more than 625 Republican, Democratic and Independent Mayors.

In response to these arguments against national reciprocity (many of them unfounded and hyperbolic), supporters of the bills need to follow Rep. Trent Franks (R-AZ) lead and simply point out that states licensing concealed carry “have 22% lower total violent crime rates, 30% lower murder rates, 46% lower robbery rates and 12% lower aggravated assault rates compared with the rest of the country.”

It should be noted that in 2009, a similar national reciprocity bill fell two votes short of the 60 needed to pass the Senate.

Now, things are different.  We’ve got two shots to make it happen; let’s keep our fingers crossed and hope one of them passes.

Currently, both bills have been referred to the Senate Committee on the Judiciary.  We’ll keep you updated as more news develops.