MD Arms has patented an interesting magazine for the Saiga 12.  The patent illustrates the designs for a double-stack shotgun shell magazine, something that’s generally believed to be impossible to make work.  This magazine has a few tricks up its sleeve, though.  The Firearm Blog found the patent application at the United States Patent and Trademark Office (USPTO). 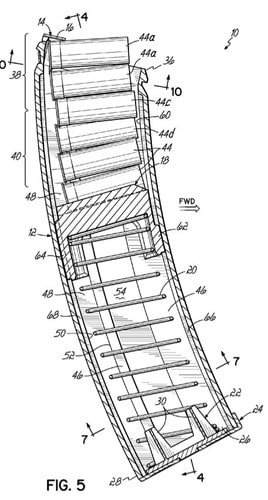 In a single-stack magazine, you can more reliably feed rimmed cartridges because after you load them they stay relatively in place.  Double-stack magazines have to transition their ammunition from being arranged in a staggered or fully side-by-side arrangement to a single cartridge or shell at the top of the magazine.  This transition can cause ammunition with rims behind other rims to be brought to the top, ensuring rimlock.

And this is exceptionally hard to prevent with shotgun shells or any rimmed ammunition that can vary in length.  The magazine has to be able to feed all lengths of shell, but if there’s half an inch of play back and forth for the shells inside, rimlock is practically guaranteed at some point with that magazine.  Also the crimping process of shot shells isn’t precision work; shells of the same make from the same box can be different lengths.

MD Arms’ patent calls for a few different methods of addressing these problems.  The first and most likely solution is having a channeled magazine.  While shell lengths vary greatly, the case heads are precisely-made.  As the shells transition to single-stack at the top their rims are guided into grooves that fit around the front and rear faces of the rims, making certain that they always align properly.

The next major solution is having a different type of follower that runs in track along the front and rear of the magazine body.  By locking the follower at the center of the magazine it’s prevented from tilting from side to side as much as standard followers which are designed to tilt.  This limited movement also helps maintain rim order.

While MD Arms is a Saiga 12 specialty shop and the patent illustrations are clearly Saiga 12 magazines, the patent application specifically states that the Saiga stuff is for illustrative purposes only.  They’re going to use this patent to make double-stack Saiga 12 magazines, no doubt.  But by making the magazine nonspecific it may find its way into other firearms that shoot rimmed ammo, like the Akdal MKA 1919 we played around with at SHOT Show.

And could this be the beginning of double-stack .22 Long Rifle guns?