These rifles are updated versions of the Heckler and Koch HK91, the semi-automatic variant of the HK G3 battle rifle.

Developed after WWII, the HK G3 has proven to be one of the most reliable battle rifles ever fielded.  Originally chambered in 7.62 NATO, the G3 also earned equal reputations in the stopping power and accuracy departments.  It is in service in over one third of the nations in the world, 68 different countries. 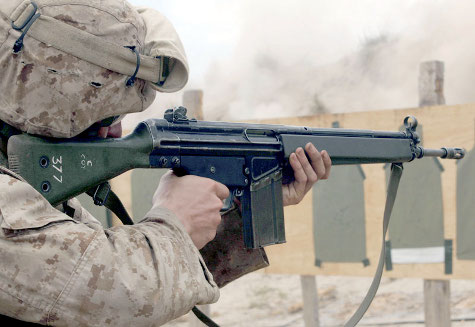 The HK91 is the semi-automatic variant of the rifle, and it proved to be quite popular in the US until in 1989, the Import Ban prohibited importation of the HK91s made in Germany, and then in 1994, all importation of HK91s produced by non-German licensed manufacturers was prohibited by the Assault Weapons Ban.

As a result, Heckler and Koch discontinued it.  So JLD Enterprises did the smartest thing: they purchased the tools and plans from a licensed manufacturer of HK91s in Portugal and began building them here.

Today, going by the name of PTR Industries, they are making HK91s not just to the original specifications drawn up by Heckler and Koch, they’ve updated the process to take advantage of modern CNC machining and gun industry technology to crank out some of the finest G3-patterned rifles the likes of which Heckler and Koch never imagined.

PTR stands for Precision Target Rifle, on account of the fact that these are very accurate semi-automatic rifles.  The G3 and its variants all use delayed roller-locked blowback action, and while it’s absolutely on the heavy side, it’s incredibly robust and can operate in just about any conceivable conditions.  They also use claw extractors for extreme reliability.

Their freshly-announced model is the PTR Modern Sporting Rifle, or MSR.  It features as few evil black rifle parts as possible, and to drive the point home, it’s brown.  Brownish green.  They’re calling it earthtone.  The idea is to get this rifle into the hands of people who live in states that restrict certain gun features, not to mention raise brand awareness.  Not too many people know about PTR in the first place.

Some of the improvements over the original G3 include a match-grade micro-rifled 18-inch bull barrel and much narrower parts tolerances all around.  It does not have a threaded barrel or muzzle device, has benign furniture, including a fixed buttstock with a large buttpad and adjustable cheek riser.  The MSR doesn’t have iron sights, either, just a fixed Picatinny rail for optics.

The rifle weighs in at a hefty 9.5 pounds, which will help when shooting .308 Winchester.  It can also shoot 7.62 NATO.  The MSR comes with one five-round magazine.  The MSR is guaranteed to shoot sub-MOA.

PTR Industries hasn’t announced the final price for this rifle, but we expect it to be between $1,000 and $1,500, which is where most of their firearms are priced; considerably less than a used pre-ban HK91.

They don’t have it listed yet on their product page, but you should check it out anyway because those are some really neat guns PTR makes, including more than a few models chambered in 7.62x39mm that accept AK magazines.

If you’re looking for a battle- and time-tested rifle (or PDW-style pistol) but don’t want another AR or AK variant, look into PTR Industries.  You might just set eyes on your next firearm.