As Guns.com noted last Tuesday night, Indiana Gov. Mitch Daniels signed a bill that would protect citizens who reasonably believe force is necessary to protect themselves, someone else or their own property from unlawful actions by a public servant.

Gov. Daniels signed Senate Bill 1 into law after the Indiana General Assembly voted overwhelmingly to reaffirm the ‘right to resist police’ law after the state Supreme Court struck it down last year in Barnes v. State of Indiana (2011).

Yet, despite the fact that Senate Bill 1 passed in the state Senate 38 to 12 and in the Indiana House 67 to 26, Daniels said he thought very carefully before signing the bill into law.

“Contrary to some impressions, the bill strengthens the protection of Indiana law enforcement officers by narrowing the situations in which someone would be justified in using force against them,” Daniels said in a written statement.

“What is troubling to law enforcement officers, and to me, is the chance that citizens hearing reports of change will misunderstand what the law says, he added”

What the Law Says

What Critics Are Saying

While the bill was endorsed by Indiana Sheriffs’ Association, Indiana Prosecuting Attorneys Council, Indiana Public Defender Council and Indiana Attorney General Greg Zoeller, there are those – like Gov. Daniels – who have reservations about the public’s ability to correctly interpret the law.

“For those who don’t take the time to read the law, it is going to be devastating for someone to think they have a right to resist if they only think an officer is acting illegally,” William Owensby, president of the Indianapolis chapter of the Fraternal Order of Police, told the Associated Press.

“Our fear all along was that it’s going to put citizens and officers into grave danger,” he said. “I don’t want to have to bury another police officer.” 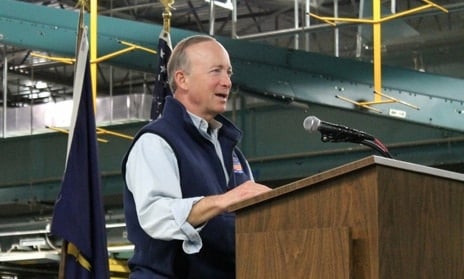 Other critics suggest that the bill does not address the real issue – unlawful entry – that was the focus of the Barnes v. State of Indiana case, which involved a fight between a law enforcement officer and a homeowner, Richard Barnes.

According to court documents, the officer attempted to enter Barnes’ house without a warrant while investigating a domestic disturbance complaint.  Barnes was arrested and convicted of resisting law enforcement and other charges.

“I think it was a feel-good measure on their part but it really didn’t achieve anything,” Greg Fettig of the tea party group America Refocused, told the Associated Press. “Police could still go in without any probable cause whatsoever.”

Fettig added: “As far as I’m concerned as a private citizen, I will not let them in without a search warrant.”

It should be noted that during the deliberations concerning SB 1, both prosecuting attorneys and public defenders testified that the ‘right to resist police’ law reads nearly word-for-word identical to Indiana’s Castle Doctrine, which passed in 2006 with a virtual landslide of support.  The only difference with SB 1 is that it extends the law to cover unlawful police activity.

In other words, this law puts everyone on an equal playing field.

My feeling is that the bill is just plain common sense.  And, as a practical matter, I agree with Gov. Daniels who said instances in which this particular law will be invoked will be extremely rare.

“In the real world, there will almost never be a situation in which these extremely narrow conditions are met,” he wrote.

(Note: ‘right to resist police’ law is admittedly a poorly worded way to characterize the bill).