Model Creep: When Guns Aren’t So NEW and IMPROVED

Whenever I read or hear the phrases “new”, “improved” or “now with even more features” I find that another cliché bubbles up inside of me:  you damned kids get off my lawn! Because I’m feeling a bit like a crotchety ol’ coot these days and I think I know the reason.

I have been reviewing a lot of classic guns recently and during my research for these articles I have been noticing entirely too much model creep in these vintage offerings. What is model creep? When you take a basic, functional item, and keep adding ‘extras’ and ‘improvements’ every year or two in order to make it the “new hotness”, only to find you are slowly sacrificing all those simple qualities that made it a classic to start with. 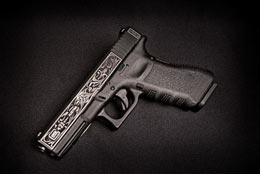 But it still makes me crazy sometimes. Why? Because often, the “NEW!” “IMPROVED!” features are just bloat. Sometimes they take a perfectly fine gun and needlessly complicate it or change the design just enough that parts are no longer interchangeable between models. Or maybe accessories you had for one model will no longer work with a new model. The frame is just a little bit bigger, thanks to that rail they added. So the holster you love and have finally gotten broken in just the way you like it no longer fits. Or those special exotic wood grips that have been something of your trademark at the range won’t mount on the new gun. Or the stockpile of magazines you got a year ago is now useless.

To my thinking, these changes effectively render the previous model “obsolete” for a frugal person like myself, and can make finding parts for it difficult or impossible. I just want to grab the manufacturer and holler in their ear that the damned gun was fine, and to leave it well enough alone.  But the reality is, when the gun is fine, everything is not fine for the gun and accessory makers and without a problem to solve, engorging revenue streams becomes more difficult (though not impossible).

NEW, IMPROVED but WHY?

What makes my blood boil even more though than the degradation of definitive firearms is the torrent of shiny “novelty” guns currently being released by many gun manufacturers designed specifically to shoot holes in your pockets. Sometimes I feel like a maker will produce a gun, just to have their name in that niche market and without really intending to make a quality product.  Other times, I find this stuff absurd and overpriced like product differentiation run amuck.

At what point is it just overload? At what point does the average consumer have their eyes glaze over because of a thousand different choices, most of which seem to be nuanced beyond all reason? No, thank you, I do not need the bayonet option for my J-frame. I’ll pass on the modular Picatinny rail system on my muzzle-loader. And I don’t want to have to select from 33 different finishes for my carry gun.

And then there are the inevitable changes from year to year:

“Oh, sorry, that style laser grip is no longer available, but there’s a new *green* laser that you can get which should fit your gun.”

“Apologies, but that basic trigger has been replaced by this new titanium trigger which weighs three grams less and is Very Cool Looking!”

“Your old rubber grips have been discontinued, but the replacement silicon-rubber grips with Grippier Grip Dots will work at just slightly more $.”

NEW and IMPROVED… for us, not you

Usually though, when I see the words, “new!” “improved!” in glossy script in gun magazines, it just means that the gun makers figured out a new way of making a part for a penny less. Though they may hype it as such, the technology isn’t as much of an improvement to gun’s ability to shoot as you may believe and though the Mad Men aren’t lying when they say it’s “better” (yeah, sure, whatever) what they really mean is just that it is “cheaper”.  And usually not cheaper for you because rarely, if ever, do we see this lower cost of production passed along to the consumer.

But hey, it is the new hotness, so tradition dictates the gun makers are gonna charge you a bit more for their newest products. You’ll like it. Really!

The truth is that this has been going on forever—but it is also one of the basic ways that long-term improvements are made to the firearms we own and shoot. A little change here, a little tweak there. A slight modification to the grips. A new sight which is better for low-light situations. A finish that protects better and reduces glare. An honest-to-goodness improvement to the recoil spring which means more reliable operation as well as reduced recoil.

These improvements wouldn’t have been made if not for manufacturers trying new things (even if they are meaningless or misleading) and represents a kind of evolution, driven by competition. Each manufacturer wants to make their product just a little more appealing to the customer, so that they will sell more and make more money and all these tiny little steps add up over time (even if some of them are in the wrong direction), creating substantial improvement when you look at the long arc of history. Lord knows that just about any of the current ‘micro .380s’ are a hell of a lot better than the .25 or .32 pocket guns of my youth – they’re smaller, lighter, more reliable, and pack a bigger wallop.