The K10/22-TD splits into two halves, the stock and the receiver and the handguard and forearm.  It also comes with a storage and traveling bag that can be carried like a suitcase or worn as a pack.

The Ruger 10/22 Takedown weighs about a third of a pound less than other similar 10/22s at 4.67 pounds.  It comes with synthetic furniture as is common to other lightweight survival and takedown rifles.  It has an 18.5-inch barrel and uses standard 10/22 magazines, of the 10- and 25-round variety, as well as any third-party magazines that work with the 10/22. 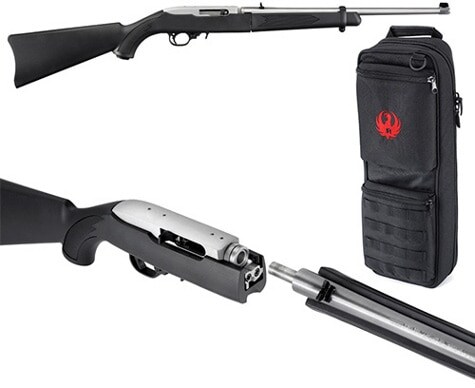 Ruger’s takedown rifle comes apart differently than many other rifles that break apart.  It uses a quick-release latch and cams into place on a locking lug.  Most other takedown rifles require you to manually index and tighten down the barrel.  The quick-release system is still adjustable, though, at the receiver where the barrel is inserted.

The locking system of the 10/22 Takedown is already being praised for its accuracy.

Jeff Quinn writes, “I was concerned that removing the barrel, and then reattaching, would change the point of impact. To check that, I set the target at fifty yards, and proceeded to fire five five-shot groups… The resulting twenty-five shot group measured only five-eighths of an inch. That group would be superb for a five shot group from a fixed-barrel semi-automatic 22 rifle, but is amazing for a take-down that was dismantled every five shots!”

Ruger has been making the 10/22 in many varieties over a period of nearly five decades, and the model has proven to be one of the most reliable and popular .22 Long Rifle designs of all time.  Other companies such as AGP Arms have manufactured conversion kits to turn fixed-barrel 10/22s into takedown rifles, but this is a first for Ruger, and a very welcome addition to their catalog.

The 10/22 Takedown is the third of three takedown rifles made by major manufacturers.  It competes directly with the Marlin 70PSS, the Papoose, and Henry US Survival Rifle, the AR-7.

Of these it is the heaviest, the longest, and the most expensive (by a small margin).  However, the standard ergonomics and Ruger brand mean a lot to people, and we have no doubts that the 10/22 Takedown will have a loyal following.

The case alone adds a lot of value to this takedown rifle.  It’s rugged and padded for the rifle’s protection, it has additional compartments for other gear including a full-length cleaning kit, magazine compartments and it can also double as a benchrest in a pinch.

The MSRP on the Ruger 10/22 Takedown is $390, just $90 over the MSRP of similar Ruger 10/22s.  We hope that the rifle is sold for under $300, but we also expect its popularity to keep prices high, at least at the beginning.  Ruger has already shipped the first rifles to its distributors and they will be for sale immediately.

If you find one, you might want to pick it up right away, as we know it’ll be a while before Ruger fills any new orders.