The US Army and Marine Corps are investing $3,000,000 in Ceradyne Inc. for the first of possibly two initial production orders of a new Enhanced Combat Helmet (ECH).  Ceradyne introduced their early production helmets to the Navy in 2010, who returned with a few improvements.

At that time, both the Army and the Marine Corps decided they were interested in Ceradyne helmets.  Unfortunately their production ran into complications and they could not produce helmets capable of meeting the ECH requirements laid forth by the military.  They’ve improved their production and are now moving to meet the initial order of helmets.  From the press release:

The ECH is controversial for several reasons.  The requirements are vague.  The military has called for a 30-35% percent improvement in effectiveness against .30 caliber projectiles, but doesn’t specify what type or what range, or even if it has to be rifle ammunition or not.  Currently the helmets must be able to withstand a 9mm NATO round at close range and bomb shrapnel.

The other major point of contention is that the ECH opts to add ballistic protection while weighing the same, where many in the military were asking for something that provides the same level of protection while lowering the soldier’s weight burden. 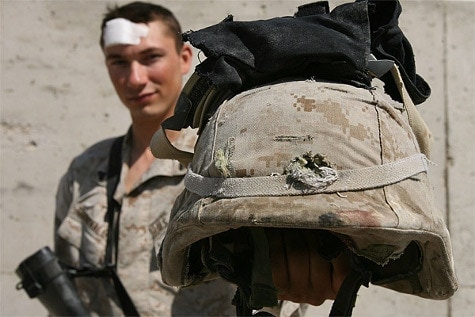 The ECH is made using Ceradyne’s Dynaphorm technique, where the helmet is made from extremely long contiguous fibers, as opposed to many short fibers, and then reinforced with thermoplastic composites.  It is the same shape as existing “tactical cut” helmets and will continue to work with existing helmet accessories, like camouflage covers.

The use of thermoplastics in the helmet indicates a shift in materials used for ballistic armor for the military, as currently the armor systems used by the Army and the USMC are all kevlar-based, which is becoming outdated as other materials replace it in effectiveness and weight.  This could be the beginning of more improved updates to the soldiers’ armor, which is always extremely welcome.

Photo credit KitUp and the US Army.