Rossi is adding two new models of levergun to their Rio Grande lineup.  One in the big-bore .45-70 Government and another in the all-around handy .410 shot shell.  These follow in the footsteps of Rossi’s popular Rio Grandes chambered in .30-30 Winchester.

Lever-action rifles are making a comeback.  The reliability of an action combined with classic looks and modern construction make for a winning combination.  Rossi is a leading manufacturer of leverguns, as they follow closely the pattern of the original rifles and sell them at very reasonable prices.  These new Rio Grandes are likely patterned on the Winchester Model 1895 or the updated version made by Marlin.

This pair of lever-action firearms have 20-inch barrels in either .45-70 or .410 bore, and have a capacity of 6+1.  Both feature walnut stocks with rubber buttpads and are available just with Rossi’s deep blue finish.  One feature they come with stock is an enlarged loop for action shooting and less knuckle wear.

They are updated with top-mounted Picatinny rails for any optics of your choosing but also have barrel-mounted iron sights for the traditionalist.  Naturally, they are side-loading and side-ejecting. 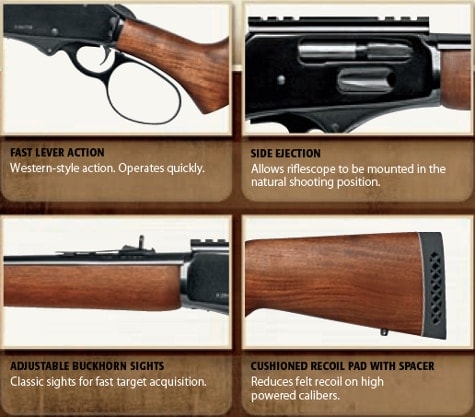 Shotguns chambered in .410 are extremely useful, especially for small-game hunting.  Their popularity is on the rise with many ammunition manufacturers producing new types of .410 shot, including self-defense rounds like Winchester’s PDX1.  The .45-70 is not cheap to shoot, but with modern smokeless ammunition a best of a round to contend with and extremely capable at taking down game all across America.  Or Americas, since these are made in Sa Leopoldo, Brazil.

Which is part of what makes them so affordable.  Both of the new Rio Grandes have an MSRP of $600 and should retail in about the $400-450 range.  Rossi previously manufactured similar lever-action firearms in .45-70 and in .410, these updated versions replace those models.

Would you pick up a big-bore Rossi for four bills, or would you spend a little more and pick up a Marlin?  Or when it comes to leverguns, are you more of a Mossberg SPX fan?