E-Textiles could Reduce Clutter for Troops

New uniforms with electronic yarn woven into the fabric that would reduce the number batteries and cabling carried by British troops may be used in the coming years. 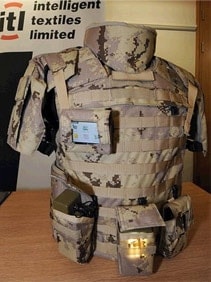 The technology is called e-textiles, which are strands of conductive yarns sewn into a blouse or trousers. In essence, they are internal conductive wires and would eliminate the risk of a soldier getting dangling power chords snagged on something or multiple ones tangled. More importantly, it would allow the individual carrying a radio, computer, a light and most electronic gear to power it all from a central power source.

Although e-textiles have been around for a number of years, Intelligent Textiles, a small British tech company, unveiled its patented product at the Defence Science & Technology Laboratory, a convention that showcases new technology for the British military. The idea was hot back in 2002 and many thought it would be a shoe-in for the U.S. military, but in reality the clothing was just too stiff to be practical in a combat zone. Perhaps Intelligent Textiles has figured out how to improve the technology.

If the British military does contract this product it wouldn’t be implemented for another two years, so it isn’t quite clear yet if the U.S. military is going to consider it a second time around.