The Ruger Blackhawk: the Single Action Revolver for the Ages

It was 1953 and Westerns ruled both film and television, cultivating a market for “throwback” weapons yet the firm behind many of these—Colt—had not produced their iconic Colt Single Action Army revolver since 1941.

One gun maker however by the name of Bill Ruger decided if Colt wouldn’t cash in on the craze, he would with a copy of the Colt revolver, the Single Six in .22 caliber. The .22 was a hot seller and paved the way for a centerfire gun, tougher than any revolver Colt ever made—the Ruger Blackhawk.

Whereas Colt mistakenly believed shooters would not want technology from another era, Ruger figured that sportsmen would appreciate a good high quality revolver, regardless of the patent date on the design. He was right and the Single Six proved to be an instant success, largely because of the quality of its construction. This philosophy that stressed quality would carry the Blackhawk line through the ages, consistently edging out the big name revolver competition with moderately priced offerings of equal quality. 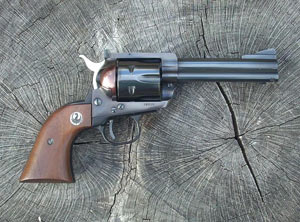 The Ruger Blackhawk chambered in .357 Magnum was rolled out in 1955. It was built out of the best steel of the day and in place of Colt’s traditional flat springs were tougher coil springs—a change Bill Ruger would later point out as one of his design’s greatest improvements on the Colt SAA. The Blackhawk came with a adjustable rear sight and an ample front sight. Those first guns (those made from 1955-62) with their flat top straps and Micro sights were known as “Flat tops” because their frames did not have “ears ” attached to them to protect the adjustable rear sights. This would become standard as iron sites for handguns continued to evolve.

Keeping up with the Smiths (and Wessons)

A year later, the Blackhawk line would see its first variant as Ruger tried and succeeded in keeping up (and pulling ahead) of the bigger name gun manufacturers of the day.

In 1956, the most highly anticipated cartridge on the market was the .44 Magnum. Essentially a tune-up of the .44 Special, handgun hunters like Elmer Keith had been hand loading .44s rounds with higher muzzle velocities throughout the early half of the 20th century and by the ’50s, the cartridge had caught the attention of Smith & Wesson and Remington, both of whom planned to chamber revolvers (notably the Smith and Wesson Model 29) in the new high pressure load.

However, Bill Ruger would beat Smith & Wesson to the stores with his .44 Magnum Blackhawk by a few months, making the Blackhawk the first SAA in .44 Magnum, after a series of events unfolded that are equal parts corporate espionage and popular legend.

Some say a Ruger employee found a strange looking spent casing while at a scrapyard. The brass was stamped “.44 Remington Magnum” and after bringing it back to Bill Ruger, the company was able to deduce that Smith & Wesson was about to launch a new cartridge, with a slightly longer case than the .44 Special. Variations on this tale place the onus on a Remington employee who unwittingly provided a Ruger employee with a sample.

Even after Smith and Wesson launched their .44 Magnum, the Blackhawk remained more popular as it was cheaper and more widely available than the Smith & Wesson Model 29 revolver. Compared to the Model 29, the Blackhawk was built on a smaller frame and could be quite a handful with full power loads.This prompted Ruger to add a top strap in 1962 and also gave the rear sight some protective ears.The gun would not see another change for over 10-years.

From 1962 through 1972, Ruger made the “Three Screw” Blackhawk but in 1972 Ruger made a big change to the Blackhawk (along with all their other single action revolvers) in response to safety issues inherent to the single action revolver design. The early models of the Blackhawk operated in very much the same fashion as the original Colt and two glaring issues with this was that: a) to load and unload the gun the hammer needed to be at half-cock potentially resulting in a misfire and b) if the revolver was carried fully loaded, with all six chambers full, the hammer would rest on the sixth chamber also potentially causing a misfire.

In 1973 Ruger brought out the New Model Blackhawk. This gun had a transfer bar safety that allowed you to safely carry all six rounds in the cylinder. You can instantly tell the difference between the New and Old Model guns because there were three screws in the frame of the Old Model and two in the New Model. 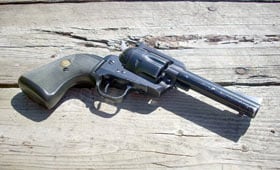 Perhaps the gun’s latent versatility (it is patterned after one of the most universally carried sidearms in American history) explains the fact that caliber selection for the Ruger Blackhawk has been pretty deep over the years. In addition to the .357 Magnum, the Blackhawk has also been chambered in .41 Magnum, .44 Magnum, .30 Carbine, .45 Colt, and .44 Special. On top of that the New Model Blackhawk Convertible models in .357 or .45 ACP gave shooters the option of interchangeable cylinders in 9mm and .45 Colt.

Additionally, Ruger toyed around with variants to tame the round largely responsible for the Blackhawk’s success—the .44 Magnum. The early .44 Magnum Blackhawks could be downright unpleasant to shoot with full loads so the grip frame was lengthened and the trigger guard squared. This model was also made from steel instead of aluminum like on standard Blackhawks. The cylinder was left unfluted in the traditional Colt style. The new gun was the Super Blackhawk and has proven to be a much better at managing recoil.

Elements of the Blackhawk (and by elements we mean frames and actual components) can also be seen in other Ruger revolvers like the Vaquero, the New Vaquero, the Bisley and the Old Army.

My first handgun was an Old Model .357 Blackhawk. It had the short 4 5/8 inch barrel and was a delight to carry and shoot. I have had a few more, including a pair of .41 Magnums in different barrel lengths, an Old Model Flat Top .357 and a 50th Anniversary .44 Magnum Flat Top. All were excellent shooters and tough as nails under any circumstances. Today, a New Model Blackhawk will set you back no more than $700.00 and because of their popularity, used models often sell for even less.

The Ruger Blackhawk has been in production now for nearly sixty years and there is no sign that it will ever let up. They work well for the hunter, hiker, sportsman, Cowboy Action Shooter and anyone who wants or needs a tough gun for a tough job, and they cost only a fraction of a Colt Single Action Army, which cannot compete with the Blackhawk in toughness. Few guns can pack all that punch into one package, but Bill Ruger did it with the Blackhawk.