Special: Replacing the M9 Contract: Does Beretta really have anything to worry about?

Rumor has it the Army is making plans to make plans to replace the M9.  Within the firearms community, this has been a hot topic (actually one of the hottest) for years now.  So when I had the opportunity to visit Beretta’s Maryland factory, I asked about the scuttlebutt surrounding the M9’s imminent demise.

Beretta execs must be shaking their Italian loafers, right?

Why not?  The answer was different depending on who you asked.  Here’s the rationale I pieced together from conversations with Beretta’s Ben Cook, product manager, and Matteo Recanatini, web and social media manager.

Ten solid reasons not to bet against Beretta.

What does the Army want, exactly?

No one knows, yet.  Not even the Army, but there are some educated guesses.

The Army Times published an insightful article on the topic last summer called “Pistols with a shot at replacing the M9.” In it the newspaper points out “limitations the [M9’s replacement] must overcome.”

How will Beretta compete in the trials? 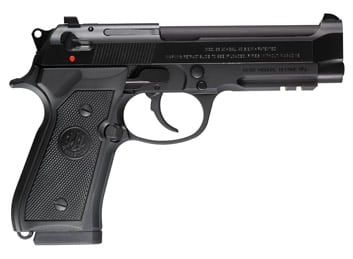 That too remains to be seen.  But there are many logical options.

They could rework the existing M9 platform.  They could use the 96A1—a .40 S&W evolution of the M9.  But that doesn’t answer all of the listed concerns.

The PX4 platform offers many possibilities, not least of which is the PX4 Special Duty, which seems ready to go as is.  The PX4 was Beretta’s entry into the last round of talks—the 2005 Joint Combat Pistol Program.  The PX4 Special Duty is an impressive weapon, by any standards.

After all, much of the discussion board guess-work about Beretta’s entry into this imagined competition was done before the success of the Nano.  Beretta may well have an entry that looks nothing like our preconceived notions.

For now we can only guess at what the Army will decide it wants.

I expected to find the designers at Beretta sweating this decision, but they know better.  Odds are the Army will take a good long look at this and decide that the M9 works just fine.  In the meantime, Beretta has an order to fill.