Last month, two shooting incidents prompted a nearby golf course to take aim at a San Antonio rifle range, using the SA Municipal Golf Association to launch a legal campaign to have the gun club shut down.

Today, a judge maintained a temporary injunction though Texan golfer had best hold their soft, self-congratulatory applause for minute as an obscure provision in Texas state law may still have sent their ace just shy of the hole.  Here’s an explanation:

The city of San Antonio formed the Municipal Golf Association as a public/private venture to help enterprises maintain greens within the city limits. A 1999 statute though that was amended just last year prohibits local governments from regulating shooting ranges established before Sept. 1, 2011.  The provision further details that cities and counties cannot legally sue shooting clubs, which fall under this designation without the Texas Legislature’s seal of approval.

The gun range, now called A Place to Shoot, has been in operation for over 35 years. 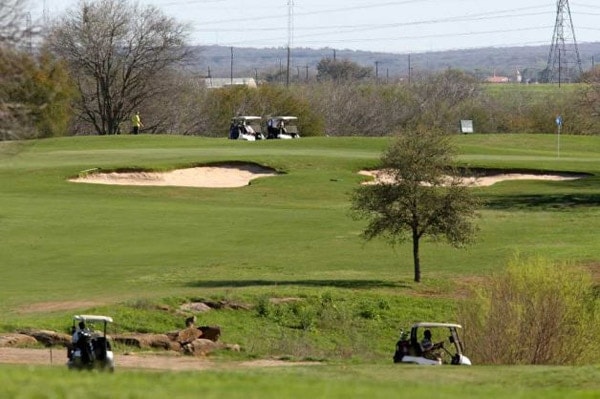 The golfers lawyered up after Justo Flores, a member of the Mission Del Lago golf course, was hit by an errant bullet on March 4 of this year, requiring medical attention.

Several days later, employees of the golf course reported that they heard shots and then “felt” a bullet sailing past them.  In response Judge Renee McElhaney handed down a temporary injunction against the range first on March 14, then again today, April 3, forcing them to close their shooting lanes.

The police could not determine the direction from which the bullet that hit Flores and lawyers for the gun range have contested the second incident as no bullet has been found.

Lawyers for the range purported that the restriction baring government entities from interfering with gun ranges should apply to the golf association because it is publicly managed (with public money). They have also argued that San Antonio’s city government has attempted to use the golf association to try to get around the law, pointing to the city’s involvement in the association’s creation and the fact that the A Place to Shoot is an outdoor range 10 miles within San Antonio’s city limits.

Today however, Judge McElhaney handed down a decision that San Antonio’s Golf Association, though they operate with a $500,000 “credit” from the city government, is not an agent of the city.  In an update on their website, A Place to Shoot, announced the ruling against them and stated (as excerpted here): 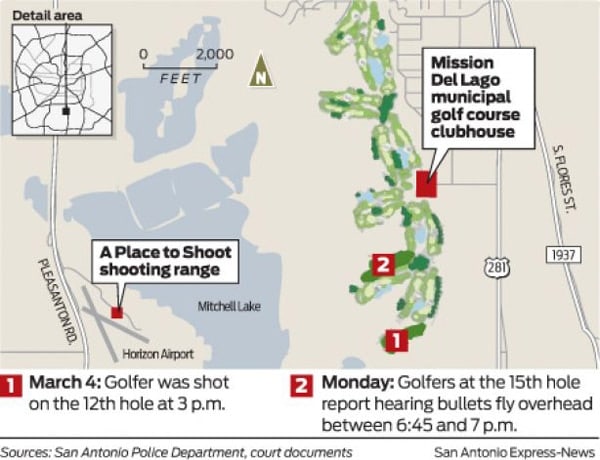 Please contact your local and state representatives.   Our belief that the suit brought by MGA-SA is in violation of State law.  We believe that this is more than a simple civil suit, and is a move to have this range shut down to further the City of San Antonio’s plans for development around Mitchell Lake.

Who would have thunk it?  The guys at Guns.com (and the guys at Spirit Ridge Rifle Golf ) were always under the impression golf and guns were two sides of the same coin.