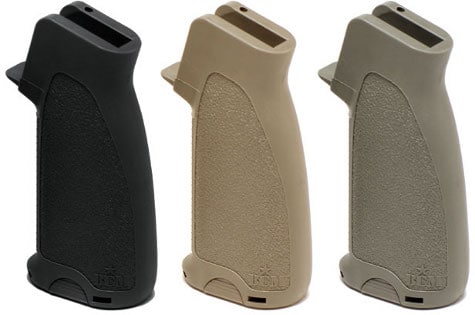 The idea is that the pistol grip is more pistol-like, more perpendicular to the bore of the rifle (or AR pistol).  This allows you to be able to manipulate the rifle more comfortably with the stock collapsed, closer to your body.  The way these guns are handled today is a great deal different from when they were first designed, and this grip reflects those changes.

It is modeled after the A1/A2 pistol grip without the finger groove in terms of dimensions, so it shouldn’t be unfamiliar to most AR owners.  It’s just more vertical.  It’s got rough textured sides and a serrated frontstrap for increased surface area and grip.

The Gunfighter’s Grip also has a storage compartment, with a hinged plate on the bottom that opens up for batteries and other small gun accessories.  Each Gunfighter’s grip also comes with a pair of trigger guard inserts to fill the gap between the grip and the trigger guard.  One is textured and one is smooth, for different preferences. 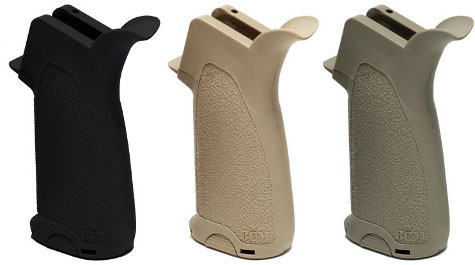 There are two models of Gunfighter’s Grip, the MOD0 and MOD1.  The MOD0 has a flush-fitting small backstrap while the MOD1 features an extended beavertail backstrap.  The Gunfighter’s Grips are available in all three tactical colors, black, flat dark earth and foliage green.  These BCM grips are available right now from their online store, Bravo Company USA, for $30.

The Gunfighter’s Grip follows in the footsteps of Magpul’s recently-announced MOE-K, another slender more vertical grip for use with AR pistols or rifles with the stock collapsed.  It’s sold at a slight premium although the Gunfighter’s Grip has many more features than the MOE-K.

Bravo Company Manufacturing is one of the growing boutique manufacturers of AR rifles and accessories.  They’re well-known for their quality accessories and high standards.