A Swedish research institute has released a list of the world’s largest arms-producing and military services companies. In 2010.  And excluding China.  What nation do you think dominates the list?

If you guessed the United States, well, that really wasn’t that hard of question now was it? 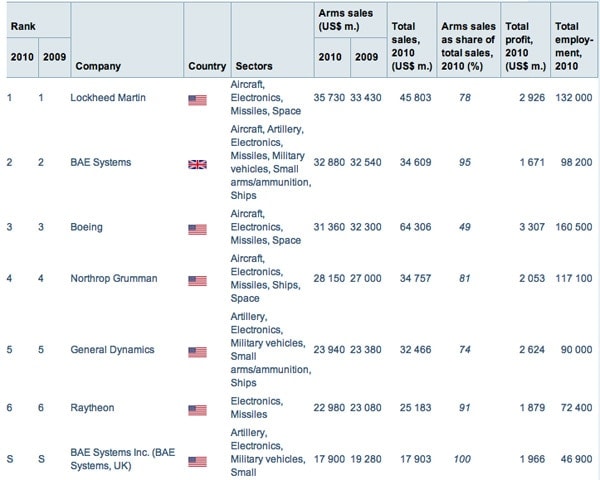 The Stockholm International Peace Research Institute compiled their list after an update to their “Arms Industry Database”, entering its 23nd edition (check out the lists for past years here).  Gun production, sales and ownership have long been notoriously difficult values to quantify, though the Swedish database contains what could be the most comprehensive listing of financial and employment data on the world’s major arms-producing and military services companies.

Arms sales are defined by SIPRI as sales of military goods and services to military customers, including both sales for domestic procurement and sales for export.  This includes public and private companies but these companies must be actively engaged in providing their wares and talents to troops around the world (which means it doesn’t consider holding or investment companies i.e. Cerebus).

What Guns.com appreciates about the study is that you can get a detailed enough rundown on their collecting and calculation methods.  In it, they address some of the shortcomings of this ranking, namely the lack of comparable and sufficiently accurate data to include some countries, chief among them China.  The SIPRI report further postulates that a fair number of Chinese firms should be included in the top 100, with perhaps a few even breaking into the top 50 gun makers but still maintains that they are confident in their ranking of world’s largest military suppliers.  Two other large gun making nations that could not be assessed due to incomplete bookkeeping but likely would have made it on the list were Ukraine and Kazakhstan.  Get more information on how they compiled the report here.