The Illinois Supreme Court in a unanimous ruling today, put into motion a serious legal challenge to the constitutionality of Cook County’s gun control mainstay, their “assault weapons” ban. After a brief deliberation, the judges allowed the challenge (heavily backed by gun rights organizations like the NRA) to proceed, despite its dismissal in two lower courts, setting a date to hear evidence as to whether “assault weapons” should receive the same Second Amendment protection along with handguns.

The plaintiff’s case posed several arguments but attorneys for the gun rights crowd mainly asserted that the Cook County ordinance (against ordnance?), which has been in effect since 1993 and rubber stamped again in 2006, is too vaguely written, particularly in the scope of new legal developments (think McDonald and Heller) and emerging technologies (retrofitting sporting arms with tacticool attachments for example or extended magazines).

The Plaintiffs (three Illinois residents with the backing of IGOLD and the NRA) maintain that, as it stands, the wording of the law is based on a faulty definition of “assault rifle” (a sentiment held widely by American gun owners practically whenever the term is seen in print), but that the statute also must be reconsidered in light of the precedent setting 2010 McDonald ruling 5 that succeeded in overturning Chicago’s decades long ban on handguns. 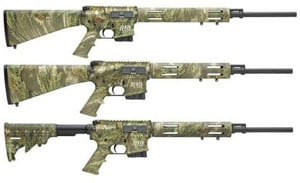 But perhaps the most damning moments of the appeal called attention to a litany of bookkeeping and factual errors made by the Cook County Board that had not been updated since the ’90s. For example, one statistic featured in the 1993 version of ordinance makes the claim that “assault weapons” are 20 times more likely to be used in crimes than other weapons. A 2000 U.S. Department of Justice report later found that assault weapons were used in somewhere between two to eight percent of all gun crimes. The Superior court said that the lower courts that dismissed this case were not presented with this evidence appropriately during their sessions.

As written, Cook County prohibits the sale or possession of “any assault weapon or large capacity magazine.” It goes on to describe several features that identify an “assault weapon” such as a protruding grip or a shroud attached to the barrel and also calls out a couple of guns by name (most glaringly the AR-15) as violating the law of the land.

Richard Pearson, executive director of the Illinois State Rifle Association (another gun rights group in the mix), told the press: “It bans the most popular hunting rifles … that there are in the country. And there’s no reason to do it. There’s no justification for it at all.”