The man who allegedly shot and killed seven people on Monday at a Christian college in Oakland, CA, was charged today with seven counts of murder and three counts of attempted murder.

If he is found guilty of multiple murders, which is likely given the evidence, he could be sentenced to death under California law.

The man prosecutors have charged is One Goh, a 43-year-old Korean-American.

Goh attacked Oikos University on Monday, armed with a .45 caliber pistol.  A former student at the tiny private school of about 100 students, reports suggest that he was seeking revenged for being expelled in January.

The school has not publicized the reason for his dismissal (other reports claimed he dropped out), but one professor at the school believes she may have been his intended target. 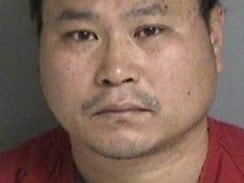 Ellen Cervellon, the nursing program director at Oikos, said Goh become angry with her when she told him that the school could not refund him all of his tuition money from past semesters.

“I have that weight on my shoulders and I don’t know what to do with it,” she told the Associated Press. “Every single one of those students were going to be an excellent, excellent nurse. They’re in my heart, and they always will be.”

Additionally, there were reports that Goh had a penchant for violence and was picked on by other students.

Romie John Delariman, an Oikos nursing instructor who taught the suspect and victims, said Goh was a good student, but he used to brag about violence and told a story about beating someone up who tried to mug him in San Francisco.

“I don’t know if you could call it mentally unstable, but sometimes he would brag that he was capable of hurting people,” Delariman told the Associated Press in an interview.

“He said he was too old to go school with all the young people, and he said all his classmates were mean to him,” Delariman added.

Whatever the case may be, it’s clear that Goh snapped.

“This was a calculated, cold-blooded execution in the classroom,” Jordan Oakland Police Chief Howard Jordan said to CNN affiliate KTLA. The suspect “just felt a certain urge to inflict pain on them,” he said.

Reports say after Goh discovered that the administrator, Ms. Cervellon, was not on the premises that day, he grabbed a nearby secretary and took her into an occupied classroom.

Once in the room, he shot the secretary and instructed the students in to line up against the wall.

“I’m going to kill you all,” Goh shouted. 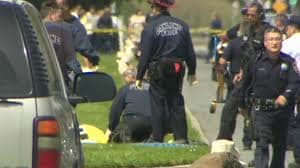 When the students began to panic, he opened fire on them.  He left the classroom to reload and returned, firing into several classrooms before leaving the school.

He drove off in a victim’s car, police said. Altogether, seven people were killed and three were wounded.  Of those killed, six were women and one was a man, but Jordan said investigators do not know whether Goh was targeting women.

Goh later turned himself in.  According to Jordan, he was “very cooperative, very matter-of-fact, very calm.” Under questioning, Goh “remembered very good details” about the incident, he said.

“He planned this several weeks in advance,” Jordan told KTVU on Tuesday. “He was so upset he went out and purchased a weapon and had every intent to kill people yesterday.”

In court today, Goh appeared stoic, showing no remorse for his rampage.  When asked by the judge if he understood the charges, he answered with a soft-spoken “yes.”

He did not enter a plea.  He will return to court on April 30.

If (when) Goh is found guilty by a jury of his peers, what should his punishment be?