S&W Stock Hits Two-Year High: What does it mean for you?

Smith & Wesson stock is the highest its been in two years this week.

This comes a month after the company reported growth and a high number of sales in its third quarter earnings report, and a reputable investment bank released a positive analysis of the company and reasons to invest in the firearms industry.

In the quarterly report, S&W posted that they had $98.1 million in sales, which is a 23.8 percent increase from the year before. And they saw a 60 percent surge in backlog, which equates to $198.5 million in orders that are waiting to be filled. 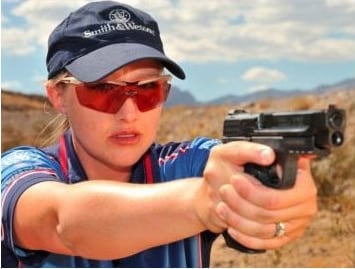 The day after, Wedbush investment analyst Rommel Dionisio took notice and released an analysis on March 9 that said, “Such a substantial increase in order backlog is a positive leading indicator for near term sales momentum, as the company should fulfill much of this order flow within the next two to three quarters.”

Dionisio also cited reasons why S&W stock would be a smart investment. He wrote, “Given strong double-digit-sales momentum combined with an improving industry outlook resulting from rising consumer confidence, (Wedbush) believes shares of Smith & Wesson should trade in line with the peer group average.”

Since Wedbush released the report, investors and financial media outlets have been strongly suggesting S&W stock. At the time of the report, S&W stock hovered around $5, which is about $40 less per share than Ruger, and now it’s above $8.

However, there are a few other reasons to buy S&W stock besides price. First, many business writers have said, as well as spokesman for company, the M&P line is booming. It’s a quality pistol line that’s affordable and widely available.

Guns.com recently visited the S&W factory in Springfield, MA, and discovered that production of the pistol (and other products of course) has been running in full gear for some time now.

Shortly after Ruger released their third quarter earnings report, they followed up with a public statement saying they would not take any orders until June or later. However, there’s no real indication that this hurt Ruger financially, but it’s an obscure message that permits potential buyers to seek other brands.

S&W released a vague and somewhat cryptic video advertisement for a new product set to be released April 12. Although S&W hasn’t publicly stated what the product is, many fans have ideas. And it’s a marketing strategy that keeps people on their toes.

Lastly, and the most widely suggested theory, gun sales are on the rise again because gun-buyers worry President Barack Obama may tighten gun laws if re-elected.

So what does Smith & Wesson’s success mean for you? If you keep buying, S&W will continue manufacturing its weapons, in turn more companies will produce higher quality products, which, in the end, equals more lower priced, better quality guns out in the market. Companies will be fighting for your business.