Beretta and Social Media: The future of gun marketing

After spending the better part of a day wandering around Beretta’s Accokeek, Maryland, factory, I came away with a completely different take on the world’s oldest firearms manufacturer. 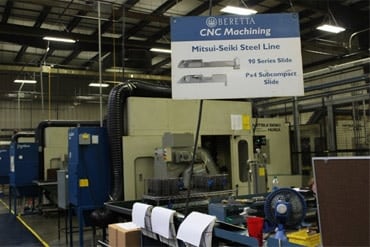 I expected to see some guns and I saw lots of guns.  I was as impressed as I expected to be, but I wasn’t surprised until I got a glimpse behind the scenes.  I’m not talking about the giant CNC machines, or the broaching of barrels, but what seemed genuinely new was Beretta’s dedicated approach to social media.

Matteo Recanatini is the Web and Social Media Manager at Beretta.

Recanatini looks like a misplaced Baldwin brother (more like Alec than Stephen).  Many of the folks at Beretta were sporting a mix of business and tactical casual.  Not Recanatini.  He was a bit more formal.  I asked where he’d found his shoes—slick oxfords in an oak-tanned color I don’t see too often.  His answer made sense.  Milan.

Recanatini is a bit of an anomaly.  He seemed decidedly urban and was as comfortable with the nuances of marketing as he is with all-things-Beretta.  And he’s the only bona fide Italian I met in the Accokeek facility.

Recanatini and I talked through the approach over lunch.

And the company’s goals are simple. Beretta is changing the way it relates to its customer base.

The followers, likers, lurkers, tubers—whatever you call them—are there willingly.  Many of these people are already loyal to the Beretta brand.  While this makes direct marketing easier, it also opens unexpected lines of communication and allows for the creation of focus groups.

This use of new media is as simple as demonstration videos available on YouTube—how-to videos that supplement manuals and explore more advanced skills.  One might explain the auto-loading feature of a shotgun.  The next shows you how to change a hammer in a 92FS.

On the other end of the spectrum is the interactive conversation with customers on the Facebook page.

Is there a downside to this approach?

While email and texts are fast, they’re not as fast as a phone call.  Any delay in response might be perceived as an actual delayed response.  Not good.  The customer feels ignored.

To avoid this, Beretta has to be more compulsive about the pace of communication.

And we, as consumers, are still more likely to provide negative criticism than positive feedback.

It is.  Not long after I posted my Guns.com review of the Nano on YouTube, the web was awash with user reviews.  Democracy in action.  What once took months to filter back is now available in a matter of days from the product release.

Three days later, the Nano was shipping with an Allen wrench.

Beretta is tuned in—watching, answering questions and adding their own videos (like two on YouTube that show the Nano being run over by a truck).  And they’re making the changes we are asking for.

It is easy to see that it works.  Granted, a fair amount of firearms enthusiasts are crusty old codgers who don’t cotton to technological innovation, but the rest of us don’t seem to mind.

Perhaps a more appropriate question would be “why isn’t every company investing in dedicated social media?” Most have a Facebook page, or twitter feed, but they certainly don’t have a presence.