Board recommends dismissal for Marine who criticized president on Facebook

Last week, a military board ruled in favor to dismiss the Marine who ran a Facebook page that criticized the Obama administration. The board recommended Sgt. Gary Stein be given an other-than-honorable discharge, meaning he’ll lose military benefits and will not be allowed on any military base. 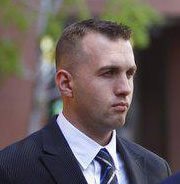 The controversy started last month when Stein got in trouble by his superiors for running a Facebook page called Armed Forces Tea Party and participating in a Facebook discussion about NATO allowing U.S. troops to be tried for the Quran burnings in Afghanistan.

In the debate he wrote that he would not follow orders given by President Barack Obama. He later specified that he meant if those orders meant detaining U.S. citizens, disarming them or doing anything else that he thought violated their constitutional rights.

Also on the page Stein allegedly posted images meant to ridicule Obama like the “Jackass” movie poster with the president’s face on it and a parody of “The Incredibles” titled “The Horribles” also with Obama’s image on it.

Stein was backed with a team of American Civil Liberties Union lawyers and congressmen when he met with the board. According to the AP, for his defense they said Stein was exercising his freedom of speech. However, the board still found his comments to be in violation of a policy that bars service members from engaging in political activities.

The board’s recommendation to discharge Stein now goes to a general who will either approve or deny the decision. If approved, Stein will be kicked out of the military, of course, but if denied, then the case could go to the secretary of the Navy for further review.

In an effort to sway the general’s decision, as reported by the AP, Stein’s defense wrote a letter to the general who will have the final word. In it, they said the Pentagon’s policy, which limits free speech, is ambiguous about the use of social media. There’s no word yet on if it worked.