The Colt LE6940P, or Advanced Piston Carbine (APC), was announced a little while ago and is now available in stores.

Originally designed for military use, the APC uses a gas piston for improved reliability over direct-impingement systems while still delivering on the accuracy AR-pattern rifles are famous for.

What makes the APC stand out against other gas-piston ARs is the piston linkage.  Instead of striking part of the bolt carrier directly, the piston uses an articulating link piston (ALP) which allows the operating rod to, in engineering terms, wiggle.  This corrects for the downward pressure on the bolt helping to eliminate carrier tilt.  It uses a standard AR bolt carrier group.

Carrier tilt is a problem with some gas piston designs for ARs.  When the gas piston strikes the bolt carrier, the force is not transferred straight backwards in line with the bore and buffer assembly.  It pushes the bolt carrier downwards and into the wall of the buffer tube leading to accelerated wear and even chipped and shaved metal.  By allowing the operating rod to wiggle that downward force is shifted to rearward force relieving stress and letting the rifle cycle linearly.  Colt says that this also increases the accuracy otherwise lost when carrier tilt is present, which makes sense. 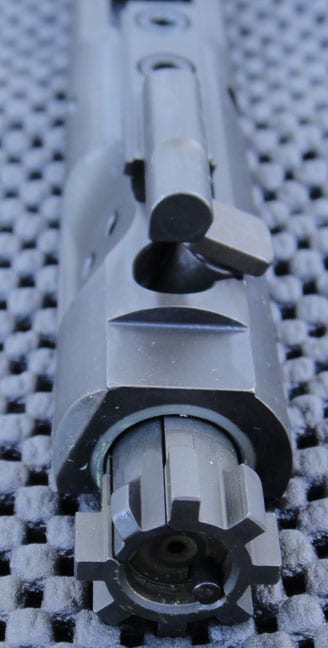 The Model 703 was made to meet the requirements for US special forces in the ’60s.  The APC is simply semi-automatic only, for regular people and also agencies that don’t issue select-fire weapons to their personnel.

Like many modern rifles that use a gas piston, the APC has a 3-position gas regulator.  The regulator and gas-piston are hard chromed to reduce wear and ease maintenance.  In other respects it is similar to many premium tactical ARs.

The ACP has a 16-inch M4-profile barrel with a cutout for barrel accessories, a monolithic upper receiver with a full-length flattop Picatinny rail, and flip-up backup iron sights.  The front sight is integrated into the gas block.  The furniture looks like A2 polymer but the APC comes with a Rogers Super Stock.  It uses a standard A2 flash hider.

The overall weight is not bad at all for an AR with an integrated quad rail, at just 6.5 pounds dry.  It’s chambered in 5.56 NATO and uses standard AR magazines but is also capable of chambering .223 Remington.

Being a Colt, and a special Colt for that matter, this rifle commands a price premium, with real-world prices starting at around $1,800.  Plus, and this is a big plus for many people, it’s a Colt.

So do you prefer gas piston systems over direct impingement?  Which would you rather have, a Colt APC or LESOCOM, Colt’s civilian version of the M4?