The recent announcement implied that the upcoming addition to the M&P line of pistols was intended for everyday concealed-carry, and the photos reflect that.

Here is the original photo. 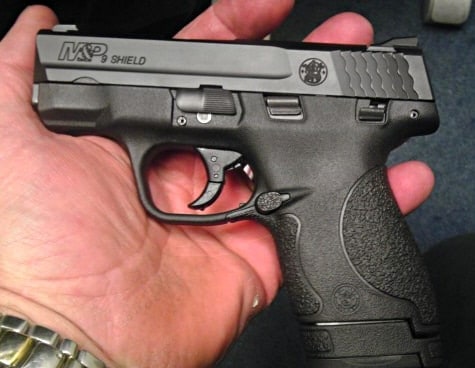 It appears to be a single-stack 9mm subcompact pistol.  The sights look like they are a different profile and time will tell if the Shield’s sights will be interchangeable with the existing lineup of M&P handguns.  For reference, here’s the double-stack M&P Compact for reference. 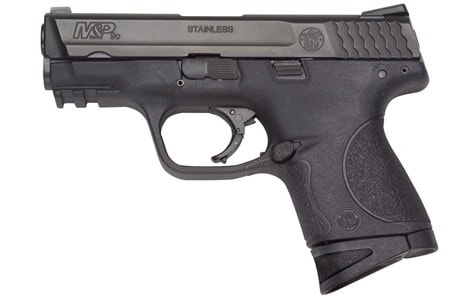 You can see that the grip is narrower and contoured differently, particularly around the magazine release and trigger guard.  They’re also smaller-looking.  The two pistols are close in height but the Shield looks like it has a shorter barrel, possibly in the 3-3.5-inch range.  It also has the optional manual safety, which could mean Smith & Wesson has multiple models ready or are starting with their manual safety version which will no doubt be popular with law enforcement.

It’s clearly using an extended magazine with a grip spacer and we expect it to be in the 6-7+1 capacity area if it is a true single-stack.

This gun in this photo looks good enough to be a production version which supports the theory that Smith & Wesson’s April 12th unveiling could also be a hard launch, with units already distributed and ready for retail sale.

The world of polymer-framed single-stack deep concealment pistols has expanded a lot recently, with pistols including the Springfield XD(s), Beretta Nano and Bersa BP9 CC joining the existing ranks of Kahrs, Walthers, Kel-Tecs, Rugers and Diamondbacks to name a few.

Still, the existing M&P pistols are extremely popular in the polymer pistol arena, in every section of the market, law enforcement and recreational and competition shooters alike.  With similar ergonomics and controls, we expect the M&P Shield to be just as successful with the concealed-carry crowd.

Who here is gearing up to buy one of these now come April 12th?