Classic Gun Question: What put the 'plus' in the .38 Special +P (and will it hurt my gun)?

The .38 Special is now a bona fide centurion (and then some) but back in 1974, it got a well needed kick in the pants when SAAMI gave a +P rating to any load over 17,000 PSI but under 20,000 PSI. Forever since, the question “Can my revolver handle +P ammunition?” has been posted on gun forums and eliciting responses of derision, speculation, precise wisdom and even downright hilarity. So what about the .38 Special +P? Is it really as hot as advertised and how does it compare to the .38 Special of old?

For decades the most common bullet that you could find in the .38 Special was the old 158-grain lead round nose, which proved lackluster in the ways of personal defense. Lawmen found in the early days that the old 158 grain lead bullet failed to penetrate just about anything with authority so out came the .38-44 which took the .38 Special to new heights (and speeds clocking in around 1,100 fps—quite the feat for the 1930s).

The problem was that if this round ended up in anything other than the big N-frame Smith & Wesson revolver the vibrations would end up knocking the rounds off kilter (sometimes called knocking them “loose”), resulting in malfunctions. This problem went on for nearly forty years until there was a decision made to remove the .38-44 rounds from production.  Luckily, that was also the same year makers rolled out that the .38 Special +P, which effectively stepped in to solve the problems the .38 Special faced, balancing power and recoil.

Put your gun on a diet 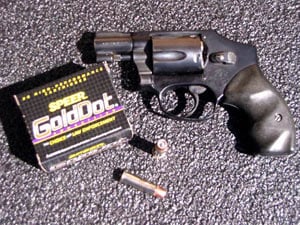 Whether by design or coincidence, the .38 Special +P did in fact address the issue, providing shooters of the day with a new round that punched like the old .38-44 rounds but also wouldn’t damage their expensive handguns.  Today, the argument can be made that the .38 Special +P is the definitive .38 round.  But back to the original question: what about using .38 Special +Ps in guns “not rated” for it?

I see this question come up a lot with Smith & Wesson revolvers, especially the smaller guns like the little J-frames like the Chief’s Special and in Colt’s Detective Special. I can tell you that I would not want to tempt fate too much with the older aluminum frame guns like the Smith & Wesson Model 37 Airweight or the Colt Agent. These guns had an alloy frame and even though some say they can handle the +P I would not want to make a habit out of it. I know many people who do shoot even hotter rounds through their smaller guns, but the key to some level seems to be never a steady diet of them.

Straight from the horses mouth

The real problem though that I see is that with so many revolvers and pocket pistols out there chambered in .38 special, the market has become far too large for shooters to keep track of.  Many are just plain confused as to the construction of the gun versus the power of the round and accordingly, stick with the standard velocity stuff because they are worried their gun will suddenly turn into a hand grenade if they load the more powerful +P rounds.

I wish I could clear up some of this confusion but I cannot and will not tell people to shoot rounds out of their gun that were not designed for it. That said, if you are not sure of what your handgun can take, then I advise you to call the people that made the gun in the first place.  Contacting gun makers is much easier than you think; usually contact forms listed on a company’s website are answered expediently and thoroughly (and not just for outfits like Guns.com but any and all customers).

I suggest you avoid the forums and Internet articles (accept this one of course!) and get the scoop on whether your gun can take the round straight from horses mouth.  Chances are you’ll sleep easier.

The .38 Special +P has been around now for nearly forty years and that little +P has caused more inquiries than one would guess. Can it be shot? Will my gun blow up? Well, I can’t say what the cartridge will do to your gun, but as with anything in life there are always risks and a wise man would heed the advice of those closest to it (i.e. the designers).  At the end of the day it’s your gun and your choice but I think it would be prudent to do what the manufacturer says (I won’t say different).