Four of the Five former New Orleans police officers responsible for the post-Katrina shootings at a bridge that left two civilians dead and four others wounded were sentenced by a federal judge to prison terms ranging from 38 years to 65 years last Wednesday.

The sentencing of these officers marked the latest chapter in the ongoing effort to clean up the New Orleans Police Department, an agency that has been marred by corruption.

In August, the following individuals were convicted of civil-rights violations, firearms and other charges connected to the shootings that took place on Danziger Bridge in east New Orleans on Sept. 4, 2005: Kenneth Bowen, 38; Robert Gisevius, 39; Anthony Villavaso, 35; and Robert Faulcon, 48.

Retired Sgt. Arthur “Archie” Kaufman, who was given the task of conducting an internal investigation of the shooting, was convicted on charges related to his attempt to orchestrate a cover-up. 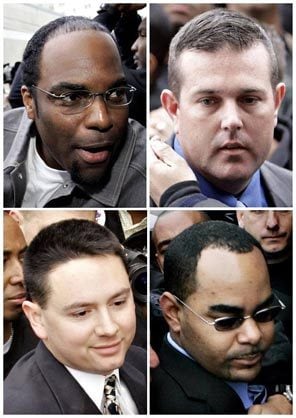 On Wednesday morning, the five men went before U.S. District Judge Kurt Engelhardt, who meted out the stiff sentences.  Faulcon received 65 years, Bowen and Bowen and Gisevius each got 40 years, Villavaso got 38 years and Kaufman got six years.

Judge Engelhardt called it “a sad day for New Orleans” and lamented the plea bargains other officers received in exchange for cooperating with the government, NOLA.com reported.

“Using liars to convict liars is no way to pursue justice,” Engelhardt decried.

Apparently, while Bowen, Gisevius, Villavaso, and Faulcon all received long-term sentences, some of their co-conspirators – who one might argue were equally as culpable – received, by comparison, a slap on the wrist (sentences of approx. three to eight years) by copping a plea with prosecutors.

The judge, for example, grilled prosecutors for seeking a 20-year prison sentence for Kaufman but letting his partner in the investigation, Michael Lohman, off with a guilty plea on conspiracy charges and a four-year sentence.

Lohman was the hightest-ranking officer at the scene of the shooting when the officers fired AK-47s into the unarmed crowd, which resulted in the death of 17-year old James Brisette and 40-year old Ronald Madison.

Engelhardt said Lohman had the authority to prevent the cover-up and didn’t.

“The buck started and stopped with him,” the judge said.

But the Justice Department was pleased with the outcome, claiming the lengthy sentences would go a long way to helping quell corruption while underscoring the message that “no one is above the law.”

“We hope that today’s sentences give a measure of peace and closure to the victims of this terrible shooting, who have suffered unspeakable pain and who have waited so patiently for justice to be done,” Thomas E. Perez, assistant attorney general for the Justice Department’s civil rights division, said in a statement.

“The officers who shot innocent people on the bridge and then went to great lengths to cover up their own crimes have finally been held accountable for their actions. As a result of today’s sentencing, the city of New Orleans can take another step forward,” he added.

As for the judge’s criticisms about the inequity of the sentences, Perez said the DOJ had to play the cards it was dealt.

“We didn’t have a case in 2008 when we inherited this. We had nothing. And hindsight is 20/20. It is easy to look back in hindsight and say why did you do this, why did you do that,” he said. “You don’t go to the witness store to pick out your witnesses. You take what is dealt.”

The attorneys for the convicted men said they plan to appeal.  And, perhaps ironically, they plan to use Judge Engelhardt’s comments regarding the inequity of the sentencing as a foundation for their appeal.

Lindsay Larson, one of Faulcon’s attorneys, said the judge “laid out the blueprint” for how defense attorneys will challenge the firearms convictions and sentences.

“We have only just begun to fight,” he said.