Last week a man in Fort Walton, FL, walked into a Starbucks for a late afternoon caffeinated beverage, but before he ordered, what Guns.com assumes would’ve been, black coffee and apple pie with a slice of melted yellow cheese he stopped off into the bathroom, closed the door and accidentally discharged his firearm. 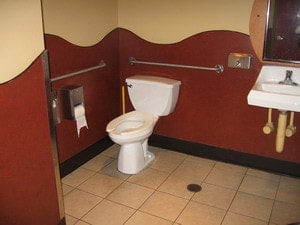 According to the the NWF Daily News, shortly after the barista heard the loud “bang”, he said the man walked out with a “shocked look” on his face. The barista then asked the man what the loud noise was and the man said he was playing with his concealed weapon and it went off.

The man then decided he didn’t want Starbucks, so he went down the street to Five Guys Burgers and Fries, whose menu is vastly different from Starbucks’, while the barista called the police.

After an investigation, police reasoned that the man was quick drawing his handgun when it fired, shattering the sink and lodging a round into the tiled floor. It’s unknown what brand of gun the man had or if someone was talking to him, but police did say the discharged round was a .40-caliber made by Hornady. No one was hurt.

The police, however, were unable to find the man to question him, but they are leaving the case open for investigation.

And since the police were unable to talk to him, very little is actually known about him other than a general description (brown hair, goatee, 5 foot 4 inches, and around 150 pounds), so police don’t know his name or if he had a Florida-issued concealed carry permit.