Project Sentry Gun uses a computer or laptop to process data taken from a webcam mounted on the sentry gun and analyzes it to spot motion.  The microcontroller takes that tracking data and operates the sentry by controlling the servos that track and aim and fire.  It even leads targets to compensate for paintball travel. 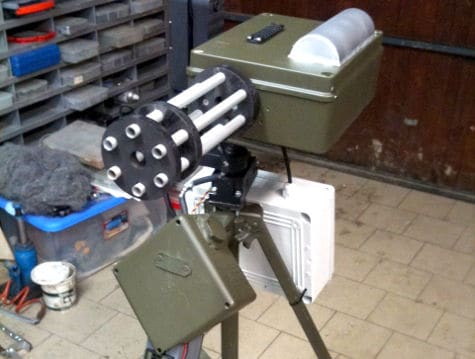 The Project Sentry Gun does more than just shoot at whatever moves through its field of vision.  The free, open-source software can be tuned to ignore small moving objects, ignore and hone in on targets of certain colors, and even play sound effect to mock and harass its targets. 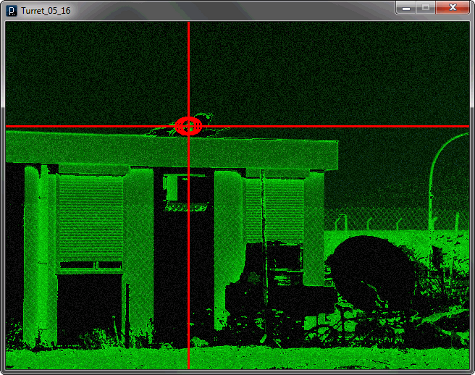 Project Sentry Gun has developed an online community of sentry gun builders who have built their own sentry guns and refined the project as it goes through new iterations.  The most recently-released is version 6, but plans in the future hope to add features like wireless operation, the option to use a wider variety of microcontrollers, design a dedicated open-source computer to replace having to use a laptop, adding ports for video game controllers for manual override, and possibly even a cell phone app to control it from very far away.  Also in the works is a kill plate for players to shoot at to turn off the sentry gun. 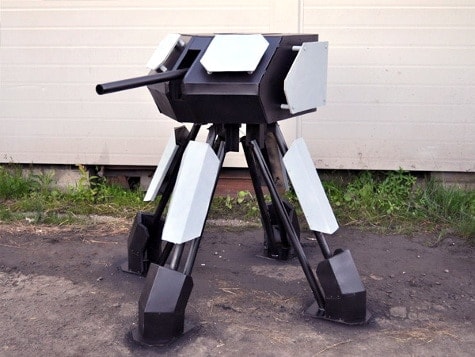 Obviously this makes your run-of-the-mill game of woodsball a whole lot less run-of-the-mill.  What’s even more impressive is how easy it is to put things together.  Rudolph has used plywood and sheet aluminum to make sentry guns, but some people go all-out.  Just like paintball, actually.

On the website is not just a parts list, but where to get them and a price guide so that tinkerers don’t get too surprised.  Still, when you look at the prices, for less than $150 you can put together your sentry base, not including the laptop that processes the image data nor the paintball gun itself.

We have to admit, we’re really quite amazed by this.  For a few bucks and a couple of weekends’ time you can build your own sentry gun.  Sure, it’s a paintball gun but that means you can actually use it.  On your friends, even.  And it’s one thing to play paintball against a team of people with human limitations.  We think playing on a field that is under the cold watch of a computer-controlled hunter is just crazy.

Guns.com has more than a few paintball enthusiasts.  Anyone gonna run out and get an Arduino and start building their own sentry gun?