This rimfire handgun is a significant departure from their standard 22/45 target, competition, hunting and plinking pistols.  There are dramatic changes to the design in order to cut as much weight off these guns as possible.

What is the most noticeable is the golden upper receiver.  In addition to the gold metallic anodized finish, it is significantly lightened with deep and wide serrations.  While they look like slide serrations, they’re just lightening cuts as the receiver is fixed and non-reciprocating.  The gold coloring is intended to make the pistol stand out as if it were a custom firearm and not a factory pistol.  It has not yet been confirmed if gold makes this gun run faster. 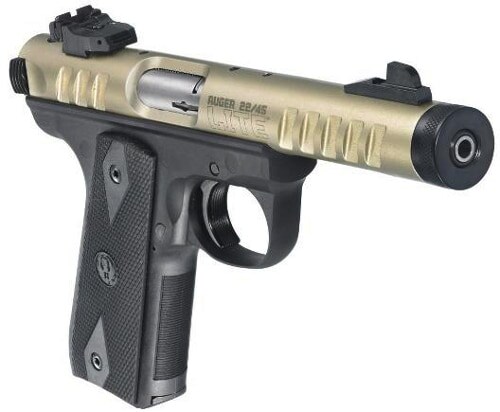 But the most fundamental design difference is in the lower grip frame.  It’s Ruger’s Zytel polymer, the same polymer Ruger uses in many of their firearms.  The use of polymer also cuts back on the weight of the 22/45 Lite, bringing the overall weight of this pistol to just 22.8 ounces.

The 22/45 Lite is in other respects a standard-sized 22/45.  It has a 4.4-inch threaded barrel, 1/2×28 for suppressors, compensators and other muzzle devices, is 1 inch wide, 5.5 inches tall and has a standard capacity of 10+1 rounds of .22 Long Rifle.  It uses raised sights that will allow for cowitnessing with low-profile optics, and the upper is drilled and tapped for an included Weaver scope mount. 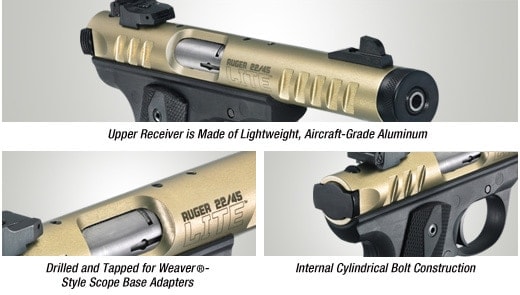 The 22/45 Lite commands a price premium over standard Ruger .22s with an MSRP of $470, with actual retail pricing starting around $370.  While it does cost more by a small margin, the cost to add these customizations to an existing 22/45 would run hundreds more and still not get you the polymer grip, so we think there’s a place for this in Ruger’s lineup.  The 22/45 Lite uses standard 22/45/Mark III magazines.

Given Ruger’s recent hold on new orders until their backlog is filled, it needs to be said that Ruger is shipping these currently and they should be on store shelves immediately.  Jeff Quinn managed to get his hands on one already.

We’ve said it before and we’ll say it again, Ruger’s constant innovation and re-imagining of their existing products is one of the main reasons they’ve been so successful these past few years.  And the 22/45 Lite is a perfect example of this, and how they not only managed to meet their $1 Million Gun Challenge, they exceeded it.

Now how long ’til we get to see these in not gold, Ruger?