Test your Metal: Myths and Misconceptions about Bullet Hardness

Over the years I’ve been handloading, I’ve seen volumes written about “hard cast bullets” and more often than not, the “hard” part of the phrase gets all the attention but none of the explanation.  Usually, articles on the topic of hardness offer up opinions on how dense a bullet needs to be for self-defense applications or hunting and many even recommend techniques on how to get your home cast projectiles harder than a coffin nail.

But the fact is that when I read articles like these—the kind that just throws out a bunch of numbers on bullet density like confetti—I often don’t have any idea what these numbers mean to ballistics, and (because I actually do know how hardness effects a bullets’ performance) I assume a lot of other people don’t either. So what’s up with bullet hardness, performance and quantifying this value? 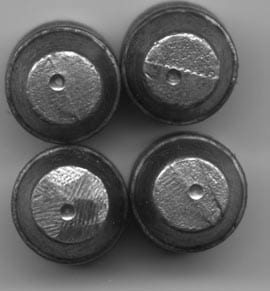 The Brinell Hardness Number or Brinell scale is what many in the reloading community claim to be the magic decoder for bullet performance, but there are a few factors that affect a load’s and accuracy that it does not account for.  This system of measurement describes the hardness of materials by using a scale of penetration against an indenter (typically a 10 millimeters diameter steel ball) loaded against a test material with force applied to the indenter (3,000 kgf or kilogram-force).  You can plug this all into a formula to get the Brinell Hardness Number (which you can read more about here) but this is the Internet, not high school, so what does this number mean and why should you care?

Well, the real answer is I don’t know—it’s going to be a little different every time, and the magic of handloading is figuring out what these numbers translate into in the field and how you can manipulate them.  However there are some assumptions we can make about a bullet’s hardness that can give us some basic insights.

First and foremost, think of a bullet like you would a car engine: each has a certain range where it operates best and if it’s not in this range it will not perform as well. For example, making a bullet too hard by casting it too hot can mean a hollowpoint will fragment instead of expanding (in addition to leading the barrel). Make a bullet too soft and that semi-wadcutter will expand and not penetrate as far as you want it to (and you will definitely get leading in your barrel).

The point is you need to determine what your bullet is going to be doing before you even plug in your lead pot. If you want a hollowpoint that is going to work under a thousand feet per second, make sure the BHN is near 10 or less (a fairly soft bullet). If the velocity picks up, the hardness of the bullet’s cast can be brought up accordingly but even a magnum hollowpoint load should be kept under 14 BHN if you want the bullet to perform like it is supposed to.

Lead is the handloader’s philosopher’s stone; it drives bullet casters mad simply because there are so many different “versions” it can come in, its behavior is almost impossible to predict.

One of the most popular sources of lead for reloaders is wheel weights, though some handloaders look down their nose at these, believing they produce inferior quality projectiles.  If my opinion matters to you, I think they makes excellent bullets and when cast, usually produce a BHN of 12. Pure lead of course is much softer and has a BHN of around 5, while linotype (a lead alloy) is at the other end of the scale with a BHN of 22 or so.

Essentially, the type of lead you pick should be around the base number you want for the bullet, but you can also affect the hardness of a bullet significantly during the casting process by manipulating the temperature of the lead as well as the temperature of the mould.  If you want to make your bullets super hard you can heat treat them after you size them. Put your sized bullets on a baking pan in a 450 degree oven for about an hour and then drop them into water.  This tempering process can take a bullet cast from a wheel weight to a BHN over 30. 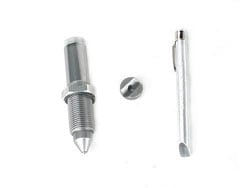 Testing your bullets is a fine thing, but you have to know how to do it right.  I suggest using a commercial tester (a mid priced one can be had for about $60) but realize that the hardness tester you decide on is not as important as when in the casting process you test the bullet.

The best time to test your lead bullets is within the first two days after you cast them because bullets tend to harden during the first few months after they are cast.  After a week, bullets cast from wheel weights can jump three or four numbers on the BHN scale so that you might think they are harder than what they really are.

So what happens if you’re a shooter looking for a softer bullet (like a hollowpoint) but now you have a bullet that has been cast too hard?  Don’t start worrying yet because not all is lost.

After six months the same bullet that continued hardening will soften down a couple of numbers on the scale. I recently tested a bullet made from cast wheel weights that started off at nearly 13 on the BHN scale and right now it sits at 17 BHN, which is a fairly good jump. In six months time it will be right where I wanted it (around 13), just in time for hunting season. So when casting your own bullets make sure that you test them at the right time so that you are not tossing away perfectly good bullets that you think are too hard or too soft but are in fact just right.

When hard’s too hard

So is there a real reason for a bullet of 30 BHN or more? Personally I cannot think of a need for a bullet over 24-25 BHN for anything. There will be little to gain from making a bullet that hard, except nothing but penetration, and having it too hard will guarantee you will get that leading you are trying to avoid.