The DoubleTap has only been on shelves for a couple of weeks and already it’s getting the second of two significant updates.  This new DoubleTap is being called the “Hedy Jane.”

Heizer’s DoubleTap 21st century derringer has been kicking up a storm ever since its first appearance in photos.  The DoubleTap is a modern execution of an old design, a two-shot break-action holdout pistol.  The DoubleTap is made with current machining tools and aeronautics-grade materials, and gives those old palm pistols a hell of a run for their money.

Originally announced in .45 ACP, Heizer quickly added two models in 9mm, bring the total number of DoubleTap variants to eight.  The DoubleTap can be had with either aluminum or titanium frames and either standard or ported barrels in both calibers.  Also added to their catalog with the announcement of 9mm models was interchangeable barrel assemblies allowing DoubleTap owners to change their handgun’s caliber or add or remove ported barrels.

The Hedy Jane brings no functional changes to the still brand-new design of the DoubleTap, just a different cosmetic option.  The Hedy Jane is a DoubleTap finished with a slick “iPhone White” paint job.

The finish is Cerakote, absolutely one of the more trusted names in the firearms industry. 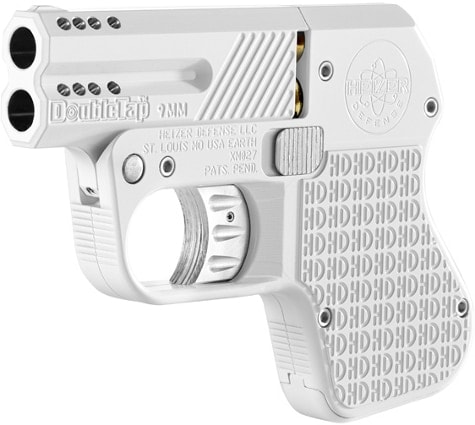 The Hedy Jane has all the same features as the original DoubleTap.  It chambers two rounds of either 9mm or .45 ACP depending on the barrel assembly, has a storage compartment for two more in the frame and is just .665 inches thick.  It is 5.5 inches long with its 3 inch barrels and 3.9 inches tall, weighing just 12 ounces in aluminum and 14 in titanium.

And guns are rarely sold for MSRP; we’re seeing DoubleTaps selling for a great deal less than that.

Anyone out there looking forward to picking up the 21st century derringer to carry along with your 21st century Apple accessories?