Here at the 2012 NRA Show, Hornady is holding an online auction on Gunbroker.com for a “monster” reloading factory (that one even makes us groan), billed as the Hornady Zombie Max Ammo Plant, with all the money raised going to the USA Shooting Team to help them strike gold at the 2012 summer Olympics in London, England (which is just around the corner).

So what is it? Well, like so many things Zombie, it’s an existing product retooled and rebranded, this time Hornady’s new Lock-N-Load Ammo Plant re-designed to complement their new Zombie Max ammo and sporting zombified hot green paint job.  We get the joke too—if you feed your press zombie ammo, it’s liable to turn on you.

When not infected, the Lock-N-Load Ammo Plant is a professional grade auto indexing 5-station all-in-one progressive press with more features than a drive-in theater.

The system seems to be more accommodating than other basement ammunition factories we’ve come across, in particular in the arena of caliber changes (no special tools required for adjustments).  It retails around $1,300, but the “conversation” factor makes the Zombie version priceless. 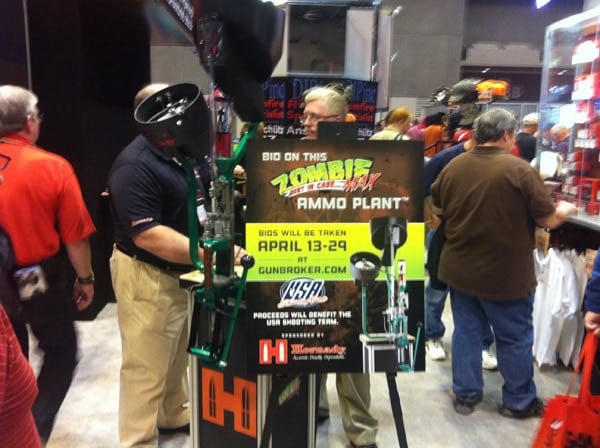 Steve Hornady said of their new creation coming to life:

“We thought this would be a fun, unique, and functional way for reloading enthusiasts to participate in the zombie craze that is currently so popular, while helping the USA Shooting team in their quest for Olympic gold this summer. It’s an honor for us to be able to support the team in this way.”

The auction started yesterday and runs until the 29th of April, 2012 and you (yes, you) can bid on it too! And hey, if the undead hordes do come a knocking on your door, having one of these in the basement pumping out rounds of .40 S&W may help raise your hopes from the dead so give it a look.