Now that it’s official, now that personal self-defense laws are under attack in this country (see Bloomberg video below), it seems as though there’s a scramble from lawmakers and state attorneys to distance themselves from any self-defense law remotely similar to Florida’s ‘Stand Your Ground’ law.

The latest example of this is in Pennsylvania where Montgomery County District Attorney Risa Vetri Ferman claimed to have avoided catastrophe by persuading legislators to add exceptions to the state’s Castle Doctrine when lawmakers expanded it last year.

Ferman told pottsmerc.com that initially, lawmakers wanted to use Florida’s controversial ‘Stand Your Ground’ law as a template for their expanded Castle Doctrine.  But after speaking with Florida officials, they decided their version of the law needed further clarification.

“We had talked to prosecutors in Florida, and we heard about all of the problems they were having,” Ferman said in a recent interview. 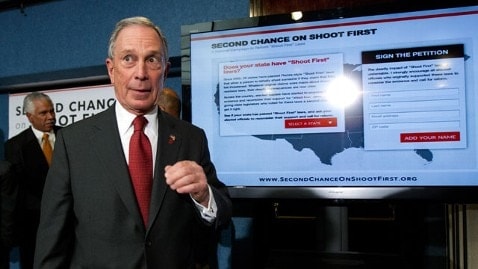 “Some of our legislators, for reasons beyond my comprehension, tried to take bad laws that other states had and bring them to Pennsylvania,” she added. “So we fought that, and it was a huge battle. And ultimately, the end result was Pennsylvania passed the Stand Your Ground provision that was not nearly as bad as the other states, because we were able to effectively argue against some of the most troubling provisions.”

According to Ferman, lawmakers added three key provisions to the expanded Castle Doctrine to make Pennsylvania’s law the strongest in the country:

The first exception prohibits the use of deadly force against a police officer. A second provision makes the law inapplicable if a gunman possesses a firearm illegally. And a third forbids criminals from claiming a shooting is justified if a suspect is engaged in illegal activity at the time.

“There is no provision under the (Florida) law that would prevent you from claiming self-defense when a police officer is trying to arrest you,” she said, illustrating the importance of the first exception. “You basically can say, ‘I felt like I was threatened’ and use deadly force and kill another person, and that’s a legitimate defense. Because you feel that way.”

Well, in looking at Florida’s ‘Stand Your Ground’ law, it appears that exception is there, despite Ferman’s claim that it’s missing.

The presumption set forth in subsection (1 – presumption of fear of death or great bodily harm) does not apply if:

The person against whom the defensive force is used is a law enforcement officer, as defined in s. 943.10(14), who enters or attempts to enter a dwelling, residence, or vehicle in the performance of his or her official duties and the officer identified himself or herself in accordance with any applicable law or the person using force knew or reasonably should have known that the person entering or attempting to enter was a law enforcement officer.

While exception two (if a gunman possesses a firearm illegally) does not appear in the Florida law, exception three does: 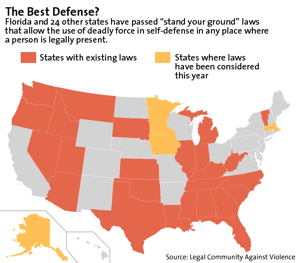 The presumption set forth in subsection (1 – presumption of fear of death or great bodily harm) does not apply if:

Use of force by aggressor. —The justification described in the preceding sections of this chapter is not available to a person who:

Is attempting to commit, committing, or escaping after the (1) commission of, a forcible felony

The simple point is that both Florida’s ‘Stand Your Ground’ law and Pennsylvania’s expanded “Castle Doctrine” are – in effect and with minor exception – the same law.

Ferman was then asked this question: some would say, if police can identify a fatal shooter, why not make the arrest and let the court system decide guilt or innocence?

“I think that’s unethical,” Ferman. said. “I think if we have evidence at the beginning that shows that someone is legally justified in exercising deadly force to protect themselves or protect somebody else, that we have the obligation to call it what it is at the front end.”

Again, one has to ask the question, how is this different than the way in which Florida is handling the Trayvon Martin shooting?

Moreover, why are lawmakers and, in this particular case prosecutors, running away from a law that protects one’s natural right of self defense?

While there can be minor tweaks here and there to a law, at the end of the day, we either have a legal right to defend ourselves (both inside and outside the home) or we don’t.  Playing with semantics or rhetoric won’t change this fundamental fact.