Magpul is showing off a couple of recently-announced magazine accessories for their wildly popular PMAG magazines, the Magpul MagLink and the Magpul MAGPOD.  These both add a layer of versatility to Magpul’s already durable and inexpensive AR-15 rifle magazines.

Seen again at the annual NRA Meeting is the MagLink, a dense polymer two-piece bolt-together magazine coupler.  This takes two PMAGs and latches them together with a good deal of force, taking advantage of the rigid ribbed bodies of the magazines. 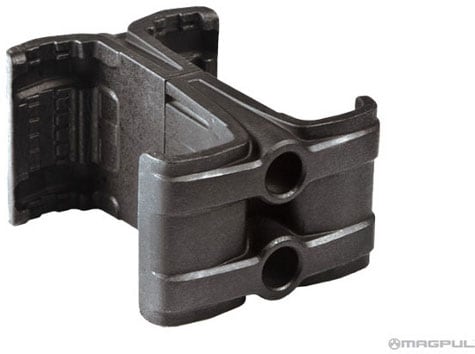 The MagLink makes going from empty to full faster on a first magazine dump and is no doubt welcome for operators as well as hobby run-and-gunners.  These were first spotted at SHOT Show this January but the excitement over Magpul’s new Remington 870 stocks and accessories pushed this small but handy mag coupler into relative obscurity.

The other new Magpul PMAG option is the MAGPOD, a replacement elongated, reinforced floorplate.  With its hoofed design, it is intended to be used as a makeshift monopod.  The MAGPOD is designed so that the bottom of the magazine is parallel with the bore of the rifle.  People have for a long time used their magazines as improvised monopods; the MAGPOD is an upgrade to make them a little more stable.

The MAGPOD also features a Santoprene insert in the squared-off front “hoof” that adds flexibility as well as an amount of grip on slick or wet surfaces that makes it more than just a block of plastic.  While it seems like such a small, almost unnecessary fix looking for a problem that doesn’t exist, the fellows at Gear Scout cited certain tangible improvements to their shooting while using a MAGPOD. 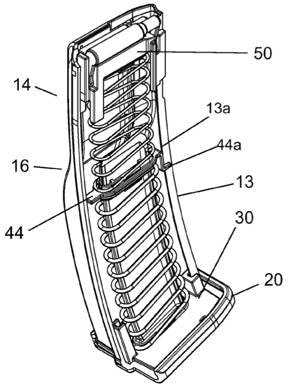 “I did realize a few small efficiencies shooting with the MagPod that added up to a bit of an advantage. For starters, it takes slightly less effort to keep the rifle on target when it doesn’t want to tip forward. Then, I realized rifle stays upright during admin movements making it faster to get back on target after going to a pocket or grabbing my hydration tube.”

Even if either or both of the Magpul PMAG accessories offer only slight enhancements over standard unmodified PMAGs you won’t break the bank to try them.  The MagLink is already on shelves and starts at or under $15 and the MAGPOD, now finalized and on its way to stores will be priced at about $20 for a pack of three.

We do like it when people find ways to modify and improve guns and their accessories, especially when they’re cheap.  But we know what you’re thinking: when will Magpul finally start selling 40-round PMAGs and their quad-stack magazines?  That is something we got a straight-up answer on, and it’s a good-news-bad-news type deal.

Yes, they’re in the works.  No, there isn’t a release date.  Magpul knows that as soon as they start selling extra-capacity PMAGs the demand is going to be huge, and they want to make sure that vendors have enough stock for everyone to be able to get their hands on some.  They’ve decided that it’s better to delay a bit and be certain that there are magazines for everyone than to put a small amount out there leaving the majority of people hanging.

In the interim, are you thinking about getting a few MAGPODs or a MagLink?  Seems like a handy way to stabilize a rifle and carry 60 rounds out front at the same time.