Concealed Carrier Foils Robbery, Now Sues to Get His Gun Back (UPDATED)

After we ran this story on April 16, Mr. Al-Mujaahid contacted Guns.com and brought up several corrections that we would like to amend here, chief among these being that he was never convicted of armed robbery.  Although Guns.com maintains we were only reporting the news as it was sourced to us from several reliable sources, upon further investigation we would like to retract any statements we printed that may have insinuated Mr. Al-Mujaahid was convicted of armed robbery or that he is a felon.

The incidents in question occurred when he was a juvenile and as such should not have been held to bear on any future legal proceedings by the Milwaukee Police department or were dismissed.

Nazir Al-Mujaahid wasn’t always the law-abiding citizen he is today.  During his adolescence, he had several run-ins with the law.  But his life of crime was briefly lived.

“In the early 1990’s I was a troubled youth. Considered ‘at-risk’ and did stupid, often illegal things at that point in my life. From about 15 to 16 years old, I hung around and was part of the wrong crowd,” Al-Mujaahid admitted to the Milwaukee Courier.

When he was released, authorities put him on probation–which he quickly violated.  After violating probation he was sent to Ethan Allen School, a juvenile correctional facility in Waukesha County, Wisconsin.

There, he turned his life around and got on the straight and narrow.

“I’m grateful for Ethan Allen because it allowed me to take time to reflect on my life and the steps I was taking. It allowed me to question my beliefs and concepts of the world and study without interruption from girls, video games, weed smoking, and other distractions,” he told the Milwaukee Courier.

Al-Mujaahid was always a fan of guns.  So, when Wisconsin legalized concealed carry this past year, Al-Mujaahid applied for a permit. 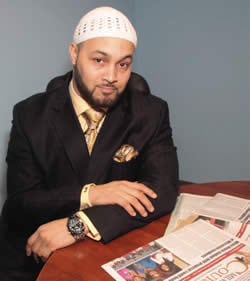 He was granted one because his juvenile crimes occurred before April 21, 1994 (apparently, Wisconsin had a cutoff date that allowed certain individuals with troubled histories to apply for CCW permits if their crimes had occurred before the aforementioned date).

Upon receiving his CCW license, Al-Mujaahid embraced his role as an armed and responsible member of society.

“I am a NRA member, a Conceal Carry advocate and even founded ccwadvocates.com,” Al-Mujaahid told the Milwaukee Courier.

He further discussed how his active and enthusiastic participation in the gun community shatters biases and stereotypes promulgated by certain advocacy groups.

“There is a stereotype that the CC person is a backwoods, loud, angry white guy and that is just as disgusting as other stereotypes,” he said.

“The CC community has shown me that I’m welcome. I mean I’m Puerto Rican and African American and I’m also a Muslim, talk about not what you expected, but it goes to show that we all have the same concerns and that is our safety and well being of the society no matter your race, religion, or creed.” Al- Mujaahid continued.

Robbery in Progress at Aldi

In late January of this year, Al- Mujaahid stopped by a local Aldi grocery store to pick up some last minute dinner items.

While in the checkout line, he noticed that a man was aiming a shotgun at a cashier, demanding money.  It was clear to him what was happening.

Al- Mujaahid quickly unholstered his semiautomatic 9mm Steyr handgun, cocked it and held it down until the robber pointed the shotgun in his direction, away from others.

Al- Mujaahid fired six or seven shots at the man, from approximately 20 feet away.  He hit the suspect in the leg and grazed his forehead.  The robber then dropped the cash and fled the store (for a more detailed account, see video).

Fallout from the Incident

Following a brief investigation, the Milwaukee County District Attorney, John Chisholm, determined that Al- Mujaahid acted lawfully and that he should not be charged with any crime.

“He disrupted an act that potentially exposed himself and others to great bodily harm,” Chisholm told JSonline.com. Video footage from the store showed “he acted reasonably and in a controlled manner during the encounter,” Chisholm added.

But some were sharply critical of Al- Mujaahid reaction to the robbery.

“Obviously, we’re glad things turned out the way they did,” Jeri Bonavia, of the Wisconsin Anti-Violence Effort, told JSonline.com. “But we believe a robbery is bad enough and that adding this grocery store shoot’em-up just increases the risk there will be a bad outcome.”

State Rep. Leon Young, also chimed in via a statement, which read  “I am extremely grateful that no innocent people were injured during Monday’s incident and the suspects have been apprehended.  However, circumstances in this instant raise questions about the effectiveness of the training requirements in the law.”

Young then went on to criticize Al- Mujaahid for carrying concealed into a store that had “posted signage explicitly banning” firearms.

Al- Mujaahid said he did not see the signs, and if he had, he wouldn’t have shopped there.

“I Want My Gun Back”

As it turned out, the gunman Al- Mujaahid shot was not acting alone.  He had an accomplice.

Police arrested both men Dierre Cotton, 20 and Edyon Hibbler, 19.  Not only were they charged with the Aldi robbery, but two other holdups; one at a Radio Shack, the other at a CVS store.

Now that the criminals have been caught, Al- Mujaahid wants his pistol back.  And Wisconsin Carry Inc., a non-profit, pro-gun advocacy organization, believes it’s time for the authorities to return it.

“WCI believes that these acts by the Milwaukee Police Department represent violations to law-abiding citizens’ constitutionally guaranteed right to be free from illegal seizures of their private property and their constitutionally recognized right to keep and bear arms,” Nik Clark, President of WCI, said in a news release last Tuesday. 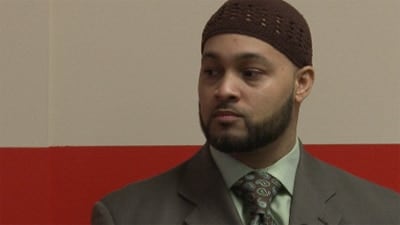 The department “appears to have a practice of concocting baseless reasons to seize any and all guns they come across in the city–even when those guns have never been used in connection with a crime,” the release stated.

However, police officials insist that the gun is still being used as evidence in the pending case against the two robbers.

But Al-Mujaahid and WCI is not buying that excuse.  Why?

Because this will be the fourth time that Al-Mujaahid has had to petition the courts to force police to return one of his firearms.

Although he’s lived a trouble-free life since his younger years, he erroneously had the charges of “being a felon with a gun, furnishing a gun to a felon and pointing a gun at someone” levied against him, though all of those charges were dropped. (EDIT)

While WCI is considering launching a larger suit over the Milwaukee Police Department’s stonewalling with respect to returning firearms confiscated from responsible gun owners, it’s demanding that it return Al-Mujaahid’s guns.