No Protests at NRA Convention as Compared to Years Past? (VIDEO)

By the numbers, the annual NRA Meeting and Exhibit held in St. Louis this past weekend was a success.   According to Shall Not Be Questioned, the Pennsylvania-based pro-gun blog, a record-setting number of NRA members attended: 73,740.

But while gun lovers, sportsmen and political junkies gathered to celebrate our 2nd Amendment rights, there was someone missing from the party: the pro-gun control protester.

In the past, sparse crowds of sign-wielding Bloomberg disciples have been somewhat of a staple at NRA events.  However, this year, apparently they didn’t get the memo that thousands of gun owners were coming to downtown St. Louis. 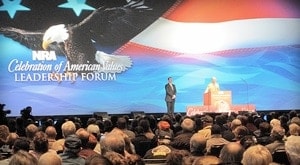 Bitter, from Shall Not Be Questioned, commented on the dearth of pro-gun control activists at this year’s event:

“This year, despite a national controversy that the media wants to draw us into before facts are even known and drumming up a protest for weeks by anti-gun groups, nothing happened,” he wrote.

Bitter wasn’t surprised by the ‘no show’ because, for the most part, real, grassroots opposition to the NRA was largely overblown in St. Louis.

“Both before and after the Martin case drew attention to the gun issue, I was checking out typically left-wing groups here in St. Louis online,” Bitter wrote.

“Not a single one ever mentioned opposition or concern about the NRA convention coming to town,” he continued.  “Sure, there were a couple of lawmakers willing to condemn our members, but there has never been any true grassroots support for it in this city.”

Anti-NRA activists were supposed to rally on the arch grounds around noon on Saturday.  Whether or not anyone actually showed up remains a mystery.  However, what is clear is that the phantom protest had no bearing or impact on the show, which went off without a hitch.

Overall though, what are we to make of this?

Well, as Bitter pointed out, the lack of grassroots opposition in St. Louis dispels the myth that urban areas and cites are largely anti-gun.

The truth is much more inconvenient for Bloomberg and the Brady Campaign and their cohorts: most rallying cries for gun control and NRA opposition fall on deaf ears.  Why?  Because people – even non-gun owners – respect our 2nd Amendment rights.  Or, worst case scenario, they’re indifferent to gun-related issues.