Politicians and pundits continue to politicize the shooting of 17-year-old Travyon Martin, suggesting that the lawmakers who helped to expand self-defense rights – passing laws similar to Florida’s ‘Stand Your Ground’ law in their respective states – are somehow culpable for the teen’s death.

What’s fascinating though, is that many ‘Stand Your Ground’ laws were passed with bipartisan support.

AWR Hawkins from breitbart.com pointed this fact out eloquently in his two articles, one about former Michigan Gov. Jennifer Granholm, a Democrat, and another about former Arizona Gov. and current Secretary of Homeland Security Janet Napolitano, also a Democrat.  Both women signed ‘Stand Your Ground’ bills into law while in office in 2006.

With respect to former Gov. Napolitano, she enthusiastically supported the measure.

“She believes in the fundamental right of self-defense,” Jeanine L’Ecuyer, a spokeswoman for the former Gov., told the Arizona Daily Star. “And the law still requires the defendant to be in imminent peril of death or serious physical injury.” 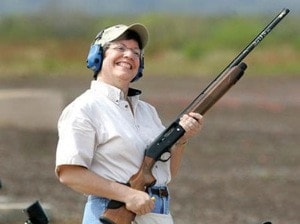 Judging by former Gov. Granholm’s actions, it appears that she too believes that self-defense is a fundamental right.

She signed not one, but six self-defense bills into law while serving as Michigan’s top chief executive.  From the NRA-ILA, dated July 20, 2006:

The six-bill Castle Doctrine Package passed with bi-partisan, supermajority support in both houses of the Michigan legislature:

•    SB 1046, sponsored by Sen. Alan Cropsey, outlines rebuttal presumptions for justified use of self-defense. The bill makes it clear that there is no “duty to retreat” if a person is in a place where they have a legal right to be.
•    SB 1185, sponsored by Sen. Ron Jelinek, allows for the award of court and attorney fees in civil cases where it was determined a person acted in accordance with the Self Defense Act and where civil immunities apply.
•    HB 5548, sponsored by Rep. Tim Moore, gives civil immunities to persons acting in accordance with the Self Defense Act, preventing criminals and their families from suing law-abiding citizens.
•    HB 5153, sponsored by Rep. Leslie Mortimer, puts the burden of proof on the prosecutor to show that a person acted unlawfully in the application of force, rather than the person using the force having to prove they acted lawfully.
•    HB 5142, sponsored by Rep. Tom Casperson, expands the definition of “dwelling” to include a person’s garage, barn, backyard, etc.
•    HB 5143, sponsored by Rep. Rick Jones, creates the Self Defense Act and specifies that it is not a crime to use force or deadly force to defend oneself if that person is not breaking any laws when defensive force was used. The person must be facing imminent threat of death or great bodily harm.

Following the passage of the bills, Granholm’s spokeswoman, Liz Boyd, had this to say, “The governor fought for and was able to get a number of amendments on this package so she could support it.”

“Language was added to assure that victims of domestic violence have adequate protection by removing rebuttal presumptions of the aggressor, if the aggressor has had a previous (conviction),” she added.

However, these nuanced amendments do not change the fundamental effect of the law: one has ‘no duty to retreat’ and the right to defend himself/herself in a place where he/she has a legal right to be.

So, one has to ask the question, why is Ms. Granholm – who now host a political show of Current TV – criticizing Republican lawmakers for supporting “the type of [gun] laws that permit George Zimmerman to walk free today”?

I suppose the answer to that question would depend on Zimmerman’s prior record.  Was he convicted of a crime that would remove his presumption of innocence under Michigan law (would that special amendment come into play)? 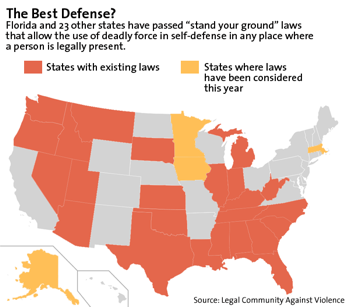 Maybe.  And if so, Ms. Granholm may have a very nuanced but cogent argument on how the ‘Stand Your Ground’ law may be improved (but I doubt that her criticism was that focused).

But overall, the reality is ‘no duty to retreat’ self-defense laws were passed with bipartisan support.  David Martosko, of the Daily Caller, did most of the legwork on this:

15 states that have passed variations of the law since 2005, the year Florida’s model legislation became law, eight — a majority — had Democratic governors when the laws were enacted. None issued a veto.

The bills in Louisiana and West Virginia passed with Democratic control of both houses in the states’ legislatures, in 2006 and 2008, respectively.

Despite the efforts of some on the left, I think what this shows us is that the fundamental right of self-defense is not a political football.  It’s a real issue that the majority of people, including politicians, agree on.

So, it appears, that the Michigan provision would not apply to the Zimmerman case.