It’s an idea that’s been thoroughly explored in science fiction and anyone who’s played a first-person shooter video game can imagine what benefits might come from a real-world personal heads-up display (HUD).  And the Defense Advanced Research Projects Agency (DARPA) is focusing on just that for our troops in the field.

But there are some realities that must be addressed before we entertain the concept of bionic vision. 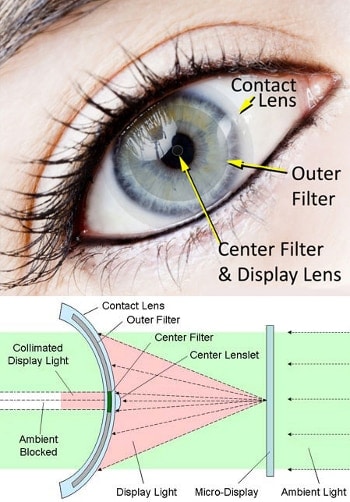 First is the method of interface.  There are a few ideas that have been bounced around for some time, such as projecting HUD data directly onto the soldier’s retinas.  With lasers.  Now there are some drawbacks to using lasers to project images onto the backs of your eyeballs besides the occasional unintended Lasik procedure.

Namely mundane things like eye tracking and resolution problems; imagine the HUD showing up in a different spot every time you blinked or looked in another direction.  Other methods of contact-lens HUDs have been theorized but all depend on technologies that are still on the drawing board.  DARPA’s solution is pretty elegant in that regard.

DARPA’s idea is to use a more conventional approach and integrate a display into the soldier’s eye protection.  There is one problem with that; the human eye just can’t focus on a display that close up.  So they’ve gone looking for a contact lens that fixes just that.  Don’t call it a bifocal, that’s not tactical.  Call it a danger-close optical plane encroachment package (DOPEP).

Developed by a company called Innovega, the DOPEPs are multi-focal contact lens that, quite simply, lets you focus on an image projected onto the back of a pair of glasses.

With these special contacts it’s possible to read a see-through display with information from satellites or drones or anything else DARPA decides to include.  Like an ammo counter for your rifle, or at the very least, a Doom Guy head.  Gotta have the Doom Guy head to stand on ceremony.

There are, of course non-military applications for this as well, not even including personal HUD technology.  We can think of many fields that would benefit from this technology.  Innovega hopes to have these lenses in production and vetted by the FDA by 2014.