A Saturday at the ‘Arms Fair’: What ever happened to gun shows?

I have heard from quite a few enthusiasts over the last year or so that the gun shows they have been attending are looking less and less like gun shows and more like a giant garage sale. So I headed out the other morning to a gun show nearby to see if what seems to happening to gun shows around the country was happening in my own back yard, too.

Most times when we go to a gun show we have an idea of what we are looking for, which for me is usually older handguns when I can afford them, reading material and reloading supplies. If I find those then usually that makes me as happy as a fox in a henhouse. So when I got to the show I sought out a friend of mine, traded some war stories about nice guns we had seen lately and then I was off.

What I found was knives. Lots and lots of knives. And this is a complaint I hear from a lot of people going to gun shows. I mean there were knives of all kinds, everything from the cheapest five dollar imported stuff to handcrafted Damascus steel. Then there was the t-shirt vendor who had a huge supply of St. Patrick’s Day stuff (I wondered what he was going to sell the second day since the next day was the day after we wear the green). 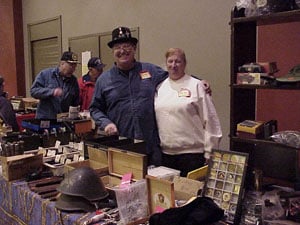 Of course I can see some guys putting fishing into the overall outdoors theme, but at this point I was confused and a little frustrated. What? Did I wander into an indoor street fair?

As I wandered around some more, I never really did find any good reloading supplies except for the occasional set of dies. I also did make a quick snag on some .38 Special brass, but there was little else to get my attention in that department.

I did see a few more book vendors, some were pretty good offering old Elmer Keith stuff, and hey some Skeeter Skelton writings, but not much else. Maybe these guys were right, maybe the gun show wasn’t much of one after all.

So after a couple of hours after looking around at a few guns, I stood back and noticed that there were far fewer dealers selling guns than everything else, with knives being far and away what I saw the most of. There were guns to look at but rarely to buy and definitely nothing I hadn’t seen 100 times before.

The death of gun shows?

So what has happened to gun shows? Are they really not gun shows anymore?

I think we can all blame the economy. For a dealer to pack up his business on a weekend away from his or her shop and then rent table space is expensive, and a lot of them are starting to stay put. Not to mention having talked to a few dealers that I know they are getting tired of ever increasing table space only to make a few bucks.

I won’t point my finger at dealer anxiety over attacks on the supposed gun show loophole, though it should be mentioned. The reason I’m not calling it out is most dealers I know at gun shows (or at least the ones I would buy from) already do background checks on every customer to avoid visits from the ATF. No, I think it’s the numbers and how they affect folk’s wallets.

But, I also think some dealers are to blame too. I have heard of a thing called gun show pricing where they jack up what they are selling simply because they are at a gun show in the first place. Customers realize this and save their greenbacks for either their local gun shop or the Internet (I usually avoid such dealers and stick with the folks I know).

So what did I buy at the latest trip to a gun show? I can tell you that not counting my admission fee I spent under twenty dollars at the whole show, me a dyed in the wool gun guy. If what I saw at this gun show is the same as what I am hearing from other people gun shows might not solely be gun shows anymore, but a term I am now hearing, an “arms fair”. Time will tell of this is a good idea.