Ballista Tactical Systems has brought to market a doubtlessly unique quad rail handguard for AR-platform rifles.  We absolutely have to admit that we’ve never seen anything like this.  The Nautilus Rotating Rail allows you to attach up to eight different rail accessories to your gun and bring them into position as necessary.

This is quite easily the most tactical rail ever invented. With a push of a button the 7-inch Nautilus Tactical Rail unlocks its two adjustable rail sections which can be rotated 360 degrees an lock in 45 degree increments. 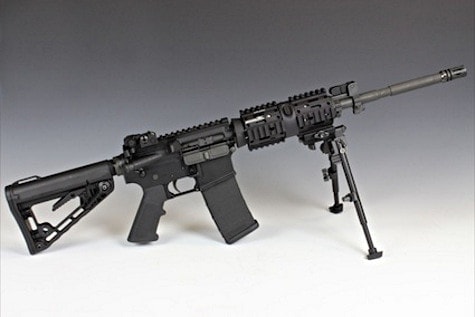 The Nautilus Tactical Rail works with any standard AR but is intended for use with carbine-length gas systems.  It is constructed from aircraft-grade 6061 T6 aluminum and given a mil-spec hard-anodized finish.

Never before has a handguard ever existed that allows its operator to switch between eight different accessories without any tools whatsoever.  The possibilities are almost limitless to what you can bring to a fight.  It is truly the Swiss Army knife of handguards. 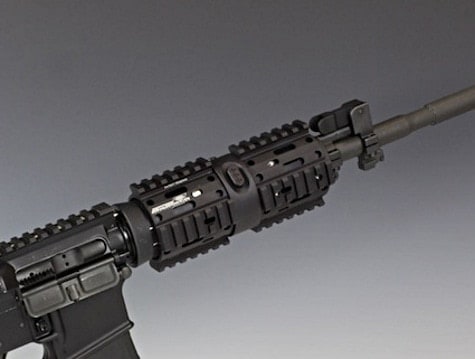 On a serious note, if price was not a factor, what could you see doing with a rail system like this?  We can kind of imagine it working with a forward magnified optic and a red-dot sight.  It could also be handy to have a set of rails offset by 45 degrees.  And naturally, you could put at least half a dozen Picatinny-mount pistol bayonets on this thing.  But then it wouldn’t rotate.

Can you imagine a role for the Nautilus Tactical Rail?  We’re all ears.