President Barack Obama should not “waste a minute” trying to pass any gun-control legislation because the issue is partly cultural and Obama, being from an urban area, does not have the social clout to get away with it, former President Bill Clinton said Thursday.

Clinton was questioned about the guns and gun control during his keynote address at a New York City conference on sustainability.

Clinton said that Obama is from Chicago and “he was in the state Senate from the most liberal district in Chicago,” implying that politicians from the Windy City do not have the best reputation when it comes to understanding the gun community.

The former president said that he was able to sign the 1993 Brady handgun bill into law, which requires background checks to be conducted on individuals before a firearm may be purchased from a federally licensed dealer, because he was from Arkansas, had grown up among hunters and had hunted in his youth.

“I knew what to do,” Clinton said. “They couldn’t turn me into some freak, and I went after them.”

He added, “I have an unusual cultural advantage to deal with this on a legislative basis.”

While this is probably cogent advice for President Obama, some would argue that it’s too late – that Obama has already tipped his hand on gun control. 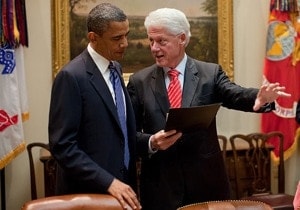 After all, ‘Demand Letter 3’ also known as the ‘long arm multiple purchases tracking mandate,’ which requires gun dealers in border states (Texas, Arizona, California, and New Mexico) to track and report individuals who purchase more than one semi-automatic rifle – with detachable magazine, greater than .22 caliber – within a five day period, was enacted by the Obama Administration.

The ostensible purpose of the reporting requirement is to thwart illicit gun trafficking along the U.S.-Mexico border where straw buyers purchase ‘assault weapons’ for Mexican drug cartels and gangs.

In January, a federal judge upheld the mandate, ruling that there was no abuse of authority.

“Congress has effected a delicate balance between ATF’s regulation of firearms and the right to privacy held by lawful firearms owners,” Judge Rosemary Collyer wrote in a 21-page ruling. The ATF’s reporting requirement “did not disturb that balance.”

Without even bring up the fatally flawed Operation Fast and Furious, which many argue was a planned catastrophe to build the case for gun control (we know, for example, that the fatal consequences of the Operation were used to help justify ‘Demand Letter 3’), it appears – just based on the multiple purchases tracking mandate – that Obama does not believe he has to play it cool with gun control.

If he is elected to a second term, do you think Obama will take a more aggressive posture on gun control?  Or will he follow Clinton’s advice and leave it alone?