Mounted Shooting Sports: a horse of a different color

One of the fastest growing and most unique sports for equestrians is mounted shooting and it is currently gaining in popularity across the country. For the most part, riders use .45 caliber single-action western revolvers that fire black powder blanks, and, in its own right, the sport has proven to be one of the most challenging for both riders and Cowboy action shooters.

Horse of a different color

The sport entails shooters/riders firing revolvers at a series of 10 targets, usually balloons, while maneuvering assorted courses at high speed. Trying to just ride a horse without getting thrown off is hard enough for most of us, but doing that at high speed through a winding course, all the while shooting and hopefully hitting as many targets as possible in the shortest span of time, must be downright challenging. 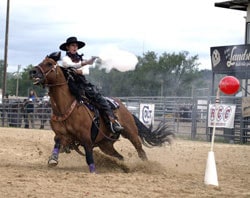 It’s definitely a fast-paced and high-speed competition in which only the very best riders and shooters, and of course the best-trained horses, can compete. Obviously the shooter with the fastest time and the least amount of missed targets takes top honors, as well as the prize money and trophies.

The standard rifle course is much like the one used for revolvers, but the targets may be at greater distances, out to and in some cases beyond fifty meters. The sport seems to have evolved from our great days when there were actual Cowboys and Indians (or Native Americans, though I never met a Native American that didn’t refer to themselves as an Indian) in the country and, of course, running fights between those groups meant firing at one’s opponent from fast-moving horses.

Colt seems to be one of the favorite pistols in the sport, with their Blue Classic Single-Action Army model winning the top spot. Other firearms used in the sport range anywhere from the Cimarron Firearms line of pistols, including the Frontier Pre-War model to their Thunderball and Thunderstorm versions, as well as Ruger’s Vaquero Western revolver.

Another segment of the sport uses rifles, such as the Taylor and Company Runnin’ Comanchero 1873 Carbine. What makes that rifle so good for mounted shooting are some of the rifle’s special features such as the short stroke action, custom tuning, its case hardened frame, and its elk butt stock cover with the buckskin leather wrap.

You would think that the sport would be confined to only the western states like Nevada and Arizona, but its popularity is growing so quickly that there are events springing up across the lower forty-eight states now. Even Alaska and Hawaii have mounted shooting advocates, so we can expect to see a growing trend in those states too.

Now, what about little Rhode Island where I sit? What’s the deal? As far as I know there hasn’t been one event planned for this year. If anyone reading this has any input into our local political machine, could you please somehow get the right people to remove the roadblocks so that the sport gains a foothold here too?

And, by the way, women are dominant in this sport with far more of them winning top honors, something in the area of ten to one over men. By way of example, Kenda Lenseigne was the 2009 overall world champion mounted shooter and Andra Olson is a two-time champion. Come on guys, I’m way too old for this stuff and I’ve already had way too many broken bones, but there’s a whole bunch of modern day cowboys out there who just have to be great mounted shooting riders.

On an interesting side note here, how many of us knew that they make ear plugs for horses? Am I the only one in the country who didn’t know this stuff? Oh yeah, that and a whole line of other products designed specifically for the sport of mounted shooting is available.