While the US Navy’s most famous weapons are often experimental and are designed to shift the boundaries of warfare as we know it like lasers and rail guns, their newest development is 100% old school.  Patterned off the Army’s M230 chain gun the M230LF brings a whole mess of 30mm high-explosive (HE) fun to the high seas.

Developed in the early ’70s by Hughes Helicopters the M230 chain gun is a single-barrel autocannon capable of firing 625 30x113mm rounds a minute.  The 30mm cartridges come in HE as well as HE-incendiary flavors in addition to target practice rounds.  Now manufactured by Alliant Techsystems (ATK) the M230 chain gun is one of the primary weapons on many Apache attack copters, specifically the AH-64 gunship, often accompanied by Hellfire missiles.  It has also been mounted on Special Operations Aviation Regiment Black Hawks. 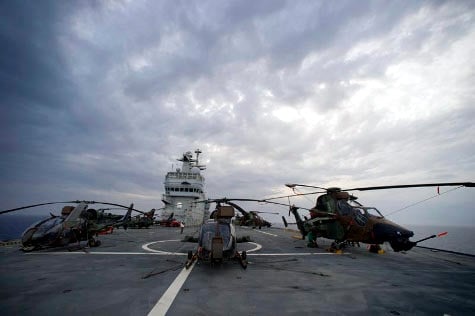 The Navy has been keen on having a gun like the M230 but for one problem: this autocannon uses an electric primer ignition system, something prohibited by Navy regulations.  The M230 is entirely electrically-operated.  It uses electric motors to cycle, feed and eject cartridges and most importantly, to fire them.

Thankfully ATK has developed an early version of the M230 chain gun into a model that uses a more conventional percussion ignition system that meets the needs of the Navy.  The M230LF uses the same ammunition but has several new features for Navy gunships.

First up it uses a linked feeding system; the standard autocannon uses a hand-loaded hopper feeding system.  It’s also been given a significantly longer barrel, up to 60 inches long from 45.  This is to meet the Navy’s requirements for a more precision weapon.  But it also uses an improved hydraulic recoil-dampening mechanism to allow the M230LF to operate on much lighter aircraft.

Navy gunships outfitted with the redesigned M230LF autocannons will no doubt be more effective against surface ships, small craft like pirate vessels, than they are with their current .50 caliber machine guns.  The request for a more accurate chain gun support this theory.

Another theory as to why the Navy is looking to upgrade with some seriously heavy metal firepower is the proven success of the M230 against light armor as illustrated by the Army during the First Gulf War.  The Navy, after all, has made clear their state of readiness to fend off any and all advances from Iran.