I want to make three quick points about Jill Lepore’s article – “Battleground America” – in the New Yorker magazine that discusses, among other things, the so-called ‘evolution’ of the Second Amendment.

1.  In the article, Ms. Lepore cites information from the General Social Survey (GSS), which claimed that gun ownership in America has been declining over the past three decades. 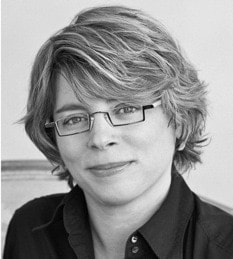 Lepore writes, “According to the General Social Survey, conducted by the National Policy Opinion Center at the University of Chicago, the prevalence of gun ownership has declined steadily in the past few decades. In 1973, there were guns in roughly one in two households in the United States; in 2010, one in three. In 1980, nearly one in three Americans owned a gun; in 2010, that figure had dropped to one in five.”

This is not the first time this study has been cited by the media.  Josh Horwitz, the Executive Director of the Coalition to Stop Gun Violence, cited it in his Huffpo article: “The Truth About Gun Sales.”

What I said back then when I examined the veracity of his article is what I’ll reiterate right now, the GSS information “was obtained in March 2011 from the National Opinion Research Center (NORC) by the Violence Policy Center.”

What is The Violence Policy Center?  Well, according to its website, it’s a “A national educational foundation working to enhance gun control in America.”

Do they have a dog in this fight?  Are they an objective source for information related to firearms?

Even if one assumes that the study was unbiased, one would still have to explain the contradiction between the GSS study and the survey conducted by Gallup in Oct. 2011, ‘Self-Reported Gun Ownership in U.S. Is Highest Since 1993,’ which found that “forty-seven percent of American adults currently report that they have a gun in their home or elsewhere on their property.” 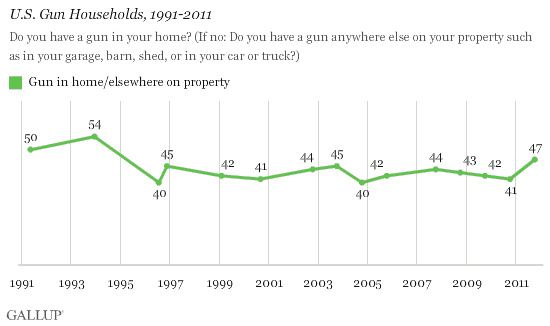 Plus, there’s a whole bunch of anecdotal information to suggest that gun ownership is actually on the rise in America.

Given all this evidence, one would have to ask Ms. Lepore why she chose to perpetuate the myth that gun ownership is declining in America?

2.  Ms. Lepore also discusses the number of guns per capita in the United States.

She writes, “There are nearly three hundred million privately owned firearms in the United States: a hundred and six million handguns, a hundred and five million rifles, and eighty-three million shotguns. That works out to about one gun for every American.”

Ms. Lepore is right about this, there’re approximately 90 guns per 100 people in the U.S.  We are, by far, the most armed country in the world.

However, what she doesn’t go on to say is that despite the fact that we have more guns than any other country, and relatively ‘lax’ gun laws compared to European nations, our violent crime rate continues to decrease (in Europe, violent crime is on the rise).

This is not wish-thinking propaganda by NRA members, but the facts according to FBI statistics. 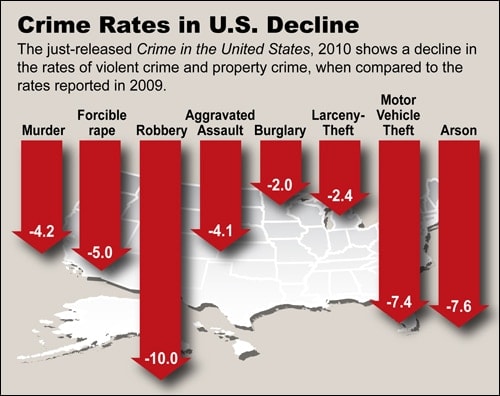 Whether Ms. Lepore wishes to admit it or not, the reality is more law-abiding citizens purchasing more firearms does not increase crime or make society any less “civil” – as she implies here:

“Gun-rights advocates say that the answer is more guns: things would have gone better, they suggest, if the faculty at Columbine, Virginia Tech, and Chardon High School had been armed.  That is the logic of the concealed-carry movement; that is how armed citizens have come to be patrolling the streets. That is not how civilians live. When carrying a concealed weapon for self-defense is understood not as a failure of civil society, to be mourned, but as an act of citizenship, to be vaunted, there is little civilian life left.”

3. The last point I want to make is a follow-up question to this paragraph:

“Between 1968 and 2012, the idea that owning and carrying a gun is both a fundamental American freedom and an act of citizenship gained wide acceptance and, along with it, the principle that this right is absolute and cannot be compromised; gun-control legislation was diluted, defeated, overturned, or allowed to expire; the right to carry a concealed handgun became nearly ubiquitous; Stand Your Ground legislation passed in half the states; and, in 2008, in District of Columbia v. Heller, the Supreme Court ruled, in a 5–4 decision, that the District’s 1975 Firearms Control Regulations Act was unconstitutional. Justice Scalia wrote, ‘The Second Amendment protects an individual right to possess a firearm unconnected with service in a militia.’ Two years later, in another 5–4 ruling, McDonald v. Chicago, the Court extended Heller to the states.”

What I really want to ask Ms. Lepore is why she thinks the notion that owning and carrying a firearm – as a fundamental freedom and an act of citizenship – gained such wide acceptance among the American public in the past half-century?

She implies that, among other factors, the National Rifle Association is chiefly responsible for the change in the public’s attitude toward guns and self-defense laws.

(Assuming you accept her premise that there’s been a revitalization of the 2nd Amendment starting in the 60s) Is she right that the NRA has changed the culture to embrace concealed carry as a fundamental freedom and an act of citizenship?

Is there another explanation, such as rising crime rates compelled law-abiding citizens to reexamine their 2nd Amendment and self-defense rights (consider chart below): 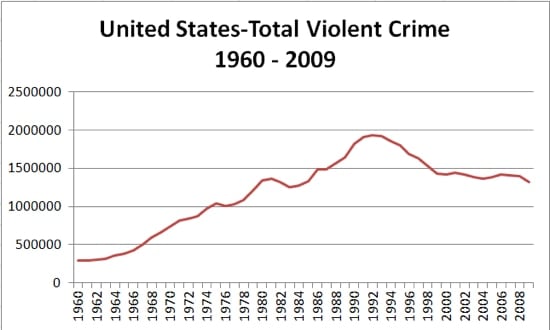