In Chatsworth, CA, a retired LAUSD teacher is putting his pension to great use.  He’s opened up a firing range.

However, the ‘Green Zone’ is not your typically shooting range.  As the name implies, it’s a lead-free, eco-friendly environment that doubles as a shooting range and a self-defense training facility.

The ‘Green Zone’ is the brainchild of Steve Trager, who dreamt up the idea after reading an article about how being both innovative and environmentally conscious is the business model for the future.

“Most ranges have two pieces of plastic on both sides and are maybe a couple feet (wide),” Trager told the Daily Sundial. “Our ranges are four-and-a-half feet in width and made from wood and steel. We also have a trolley retrieval system that ranges from easy to hard as you pull in your target because at the Green Zone the goal is to work your body.”

In addition to natural touches throughout the building and its unique environs (there’s a Zen garden and a dojo), what makes the ‘Green Zone’ green is the ammo.

Trager explained to the Daily Sundial that at the ‘Green Zone’ shooters can only fire frangible bullets made from copper and tin components.  This way clean up is fast and easy and no one is exposed to lead.

However, there’s a drawback to firing lead-free frangible rounds.

“The lead-free primers we use have a shelf life of much less than lead, and they are sensitive to heat, cold and moisture,” Trager said. “(Because of this), we’re getting misfires on roughly seven to eight percent of our cartridges, but if you bring us the misfires we’ll give you two new cartridges that won’t. We understand that drawback, but it’s a reality to our business.”

Though, despite the misfires and the slightly higher cost, Trager sees frangible bullets as being a viable alternative, particularly for indoor shooting.

“This is a battle right here because most people are not used to spending a little more for ammunition,” he told the Daily Sundial. “The idea of being eco-friendly is not a popular concept. It’s a battle being green for us and we’re going to be hit hard because of that, but it’s the way to go for indoor shooting.” 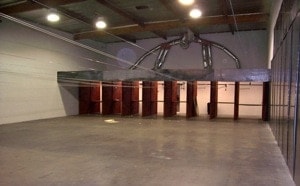 On the whole Trager would like the ‘Green Zone’ to be looked upon as not only being an eco-friendly place where shooters can blast off some lead-free bullets, but as a self-defense learning center.

“Above all we are a school. A place to learn and grow,” Trager told northridge.patch.com. “Our business is self defense. Firearm and first response training is for everyone. If you are a beginner we will start you off right. For the professionals in the field we’ll keep you sharp.”

Trager also said he wants to cater to a burgeoning demographic in the gun community: women.

“We believe the market for women is wide open. Not only will our teachers be the best but we promise all the ladies a friendly, inviting atmosphere and the cleanest bathrooms in town,” he said.

The ‘Green Zone’ is definitely an interesting concept.  One that Trager hopes will spread like wildfire across LA County.  But he’s also realistic, admitting that change takes time.

“There is an industry backlash on the concept of green and the bottom line is being the first of our kind, we have to cultivate our own audience and that will take time,” he told the Daily Sundial.

What do you think of the ‘Green Zone’?  Is it a good idea?

Pictures and video courtesy of the Daily Sundial and Northridge Patch.com