Despite having an impeccable business relationship (no bounced checks, no late payments, etc.), Bank of America allegedly told Kelly McMillan, the Operations director of McMillan Fiberglass Stocks, McMillan Firearms Manufacturing and McMillan Group International, to find another bank to manage the group’s accounts.

Last Thursday, on the McMillan Group International’s Facebook page, McMillan told his side of the story on why the world’s third largest company (according to a 2010 Forbes article) decided to terminate what was a viable and mutually beneficial 12-year relationship.

“Today Mr. Ray Fox, Senior Vice President, Market Manager, Business Banking, Global Commercial Banking came to my office. He scheduled the meeting as an ‘account analysis’ meeting in order to evaluate the two lines of credit we have with them,” McMillan wrote. 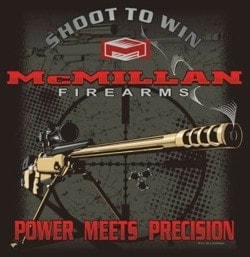 “He [Fox] spent five minutes talking about how McMillan has changed in the last five years and have become more of a firearms manufacturer than a supplier of accessories.”

McMillan interrupted him, and asked, “Can I possibly save you some time so that you don’t waste your breath? What you are going to tell me is that because we are in the firearms manufacturing business you no longer what my business?”

McMillan responded by saying, “That is okay, we will move our accounts as soon as possible. We can find a 2nd Amendment friendly bank that will be glad to have our business. You won’t mind if I tell the NRA, SCI and everyone one I know that BofA is not firearms industry friendly?”

“You have to do what you must,” Fox apparently said.

Lastly, and to clarify the impetus behind the decision, McMillan asked, “So you are telling me this is a politically motivated decision, is that right?”

According to McMillan, Fox answered in the affirmative and that was the end of the meeting.

Yesterday, McMillan updated the group’s Facebook page.  He first thanked people for the groundswell of support they’ve shown over the past few days, saying, “I want to thank everyone… I have to admit that at times there were so many remarks coming in that I could not keep up. What I do know is that there is a huge number of people who cherish their 2nd Amendment right and are willing to step in and help fight this battle.”

McMillan then went on to say that pro-gun advocates, those who value our Second Amendment rights, should not forget this politically driven attack on firearm manufacturers.

“Please don’t wake up tomorrow and forget this… I haven’t asked anyone to close any accounts or credit cards. If that is how you fight this war, then great. But even if you don’t, find a way to make sure that every time our 2nd Amendment rights are challenged, you become a soldier and do what you can to make sure we defend our rights.”

However, Bank of America addressed the incident on their Facebook page stating that the allegations are “completely false.”

And Anne Pace, BoA spokeswoman, told Guns.com that the company has no policies restricting them from doing business in the firearm industry. In fact, Bank of America actually does business with companies like Freedom Group, which owns a slew of firearms manufacturers such as Remington and Marlin, and retailers like Bass Pro shop.

It should be noted, however, that when Bank of America’s back was against the wall, the American people stepped up and bailed it out – to the tune of $100 billion.  Moreover, those taxpayer dollars came virtually string-free, with no political considerations.