The Iron Age: Do iron sights still serve a purpose?

If you look at most of the rifles on the racks on gun shops today, you will find they are set up for one thing, a scope. Many, unless they are a traditional lever action don’t have any sights at all. Well, as a shooter of several decades I can tell you this wasn’t always the case, in fact there was a time when a rifle without some form of iron sights on it was like seeing a leprechaun. How did we get this way? Why?

I have always thought that every shooter should start off with a gun with open sights and then move on to a scope as they got better. I know a few people who have never shot a rifle with anything but, and that’s a darned shame, who knows what kind of shot they would be if they had to rely on nothing but the old iron sights.

At one time every rifle, whether a bolt action or not, came with iron sights.  It was left to the shooter to decide if they wanted a scope on their gun or not. If you did not choose a scope you could go for a receiver mounted sight like the models from Lyman, Redfield and Marble or as time wore, those snap on, nonpermanent jobs. I have owned several such guns with birthdates ranging from the 1930’s up the 1960’s and all send a bullet very accurately out to one hundred yards—if I use a scope. 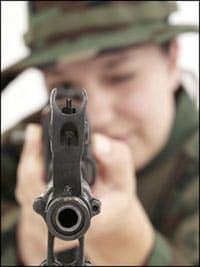 I, as many, have found that at close range, like you often find yourself shooting at in the dense forest or mountains, a scope can be your worst enemy.  By the time you see a whitetail and start the slightly delicate, slightly awkward process of putting your crosshairs on him, they’re long gone, high tailing it towards somewhere in the next county.  Sometimes I never even get the deer in my scope and I find myself needlessly glassing the woods through until I pull my head up and realize I’m searching for an animal that isn’t there.

I first learned how tricky close range shooting with a scope is when I was squirrel hunting, however. Even at twenty yards or so I was always trying to turn down the scope so I would see something other than a blur.

It was then and there that I realized how valuable having the option to go iron sights is.  Whether it’s for point shooting when you basically step on that slippery buck and he jumps or for when the target has come in closer than expected, knowing how to fire your gun accurately without the aid of optics comes in handy all the time when you are hunting (and has some easily recognizable self-defense benefits as well).  Simply put, they exist, so why not learn how to use them?

One of the problems with today’s iron sights is that they are nowhere near as good as what the old time sights were. The front sights now are very thick, and if you have a smaller target it will cover most of it. Look at a front sight from an old rifle from several decades ago and it will be very fine, either a thin blade or have a small bead. This design provided shooters with more sight picture but also less room for error, translating into more accurate iron sights shooters.

I think shooting these old style sights can really benefit shooters, so much so that on some of my guns, I have even filed down a couple of front sights to make them a little thinner to help with accuracy  (these were of course beater guns). If you’re looking to make improvements to your front sights and you’re not willing to take a file to your guns, you can add some red paint to help with visibility.  This is something I have seen done for years.

If you are looking for instruction, I think that probably the best guys to talk to about shooting with iron sights are military veterans (I learned how to shoot open sights from two instructors who were also military veterans). There are no scoped rifles in basic training and these guys and girls are taught how to shoot with open sights the way I think we all should be. There are far too many shooters relying on scopes and not learning the basics of marksmanship and the army line is rightfully, what are you going to do when your scope breaks?

Iron sights are not just a throwback to another time.  They are still not just useful, they are essential and every shooter should learn on them before moving on to bigger and better things. Take the time to learn the fundamentals of marksmanship; you might actually be surprised at how well you can do with them. Maybe you will find you won’t even need a scope after all.